Mothers and Daughters of Rishi Bharadvaja 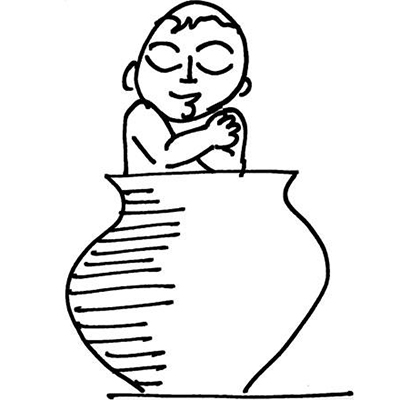 Bharadvaja is a famous Rishi in ancient Hindu lore, listed as one of the Sapta Rishis, or the seven celestial sages. Bharadvaja is one of the sages that Ram meets on his exile. It was he who asked Indra to give him knowledge of Ayurveda, so that humans had the strength to follow spiritual pursuits. He is also linked with Dhanur-vidya (archery), rituals (Grihya-sutra, Srauta-sutra, Agama), Niti-shastra (governance) and Siksha (phonetics). There are many stories related to him, though we can never be sure if the stories relate to one Bharadvaja, or many. Some of these stories can be rather controversial.

Brihaspati’s wife, Tara, the star-goddess, eloped with Chandra, the moon-god. The unborn child of that union, who revealed the truth of his fatherhood from inside his mother’s womb, was cursed by Brihaspati to be queer (napumsakam). Thus was born the androgynous Budh, the lord of planet Mercury. Budh married Ila, who was born a man, but who became a woman after entering an enchanted wood. Pururava was the son of this queer couple, and founder of the lunar dynasty of kings, to which belonged the Kauravas, Pandavas and Yadvas. Pururava, founder of the Chandra-vamsa, was technically Brihaspati’s grandson, as he was the lawfully wedded husband of Tara.

Brihaspati fell in love with his brother, Uthathya’s wife, Mamata. When he tried to make love to her, the child in Mamata’s womb shouted that the place was already occupied. An angry Brihaspati cursed the unborn child to be born blind. This child was called Dirghatamas, a famous Vedic sage, who went on to father the kings of Anga, Vanga and Kalinga. Brihaspati’s seed, unwelcome in Mamata’s womb, was cast on the ground, abandoned by both father and mother. That seed transformed into Vitatha, who was adopted by Bharata, son of Shakuntala and Dushyanta. Some say his name was Bharadvaja. He was Brihaspati’s abandoned son. His half-brother Dirghatamas and stepbrother Budh were blind and queer, cursed to be so, by their common father, Brihaspati.

Bharadvaja once saw an apsara called Ghritachi and was so sexually aroused that he spilt his semen in a pot and from that pot was born a child he named Drona, the pot-born, who went on to be teacher of Pandavas and Kauravas. Bharadvaja’s other son, Garga, was a popular sage associated with astrology, and also one who participated in the naming ceremony of Krishna in the household of Nanda and Yashoda.

Besides two sons, Bharadvaja had two daughters. Both were abandoned by their respective husbands. His first daughter, Ilavida, married Rishi Vishrava, and became mother of Kubera, king of yaksha. But her husband left her to marry Kaikesi and became father of Ravana, king of rakshasa. His second daughter, Katyayani, married Yagnavalkya, who gave her all his cows, and then withdrew to the forest, with his second wife, Maitreyi, who like him, and unlike Katyayani, sought Vedic wisdom (brahma-vidya) more than material wealth (cows).

Tales of Bharadvaja’s mothers and daughters remind us that the wisest of Vedic sages had rather dramatic lives, full of passion and heartbreak.