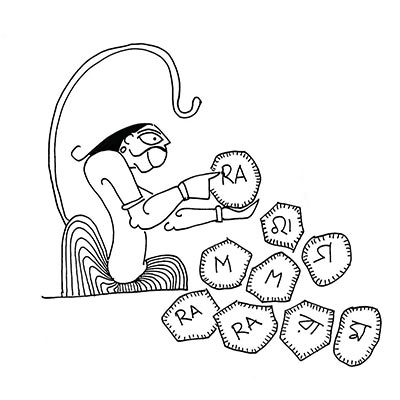 We often forget that a script is different from speech. Script is written language while speech is spoken language. Chinese script is over 5000 years old. Mesopotamia had cuneiform script 4000 years ago. But the earliest Indian script, Brahmi, about 2300 years ago on the stone edicts of Ashoka. Did Indians write before that? We are not sure.

Between the Indus valley symbols and Ashokan edicts there is a gap of over 1500 years where no script has been found. While there are tantalizing suggestions that Vedic seers created the alphabet by joining the stars in the sky, these remain speculation. Some believe that Brahmi was derived from Kharoshti, which in turn was derived from Aramaic, which was used by Indo-Greek kings of Central Asia. But this has not been conclusively proven. Or perhaps, the script was artificially created on orders of Mauryan kings to establish their authority as emperors. No one is sure. Brahmi script eventually gave birth to all other language scripts of India.

In Jain mythology, the first Tirthankara, Rishabha, who brought civilisation to humanity, had a daughter called Brahmi and she is said to have invented writing. She is thus linked with Saraswati, goddess of knowledge. In Hinduism, Saraswati is sometimes called Sharada, referring to a script derived from Brahmi that is about 1500 years old.

Buddhists used the Brahmi script for writing Buddha’s thoughts in various Prakrit languages. The Brahmins were suspicious of this new medium of communication and preferred oral communication exclusively, resisting the written language till at least 100 CE. This is one reason why most texts of India are dated between the vast period of 400 BCE and 400 CE, when writing started gaining ground. Many of the texts written in this period were probably transmitted orally several centuries before that.

When I hear stories of how Ganesha acted as a scribe and wrote down the Mahabharata dictated by Vyasa or how Hanuman wrote his Ramayana on leaves, or the name of Rama on the rocks used to build the bridge to Lanka, I wonder what script they used? Or did these stories emerge after the introduction of scripts into the Indian subcontinent? In other words, did these stories emerge in post-Mauyran times?

Writing at first was restricted to the king’s court and all writing was done in palm leaf manuscripts besides stone edicts and copper plates. Later, it was popularized by Jain and Buddhist monks who spent a lot of time making copies of holy books.

Writing’s popularity owes much to the popularity to the invention of paper in China around 100 CE. It spread to the rest of the world following the rise of Islam. Muslims took paper wherever they went. In Koran, God asks the unlettered Prophet Muhammad to ‘read’ indicating the value of the written word over spoken word in Semitic traditions, so making copies of the holy book became critical.

The value given to the ‘book’ by Muslims had a huge impact in India too. From the 10th century onwards we find not only the popularity of Hindu ‘holy books’ like Bhagavata and Ramayana but also the rise of many regional scripts such as Tamil, Odiya, Bengali and of course, Devnagari. Thanks to the arrival of books, the ancient hymns no longer had to be memorized. We just had to go to the library and flip through the pages of the book.