Modern Management Is Essentially Violent As It Is Based on Consumption 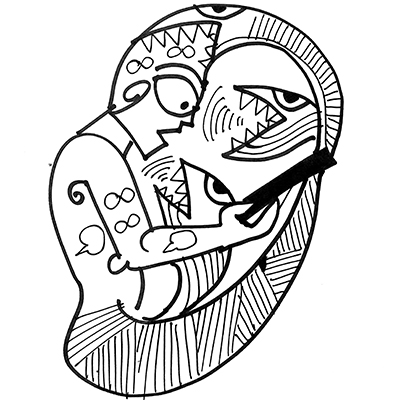 Gandhi introduced the world to the word ‘ahimsa’ or ‘non-violence’. It became popular as a tool for political dissent against the powerful state which uses violence to control people. It acquired moral even spiritual overtones. Gandhi traced its roots to Indian spirituality. But in spiritual traditions, ahimsa was used as a tool to break free from the wheel of rebirths, not overthrow a tyrant. Since violence was equated with consumption, non-violence was equated with non-consumption. In Jainism, the ultimate act of non-violence is not eating anything and fasting to death. Gandhi alluded to non-consumption as an aspect of non-violence when he dressed and lived like a hermit. But this idea is not amplified. For consumption is the cornerstone of business.

Today, non-violence is conveniently abbreviated by the urban rich and equated with vegetarian and vegan diets. They do not see farming, industrialisation and mining as violent activities. They choose not to see plants as living creatures (much as ancient Buddhists) or insist that plants feel no pain. This carefully crafted understanding of ahimsa allows vegetarian businessmen to continue to invest in businesses that pollute the ecosystem and profit from them. It also means we totally ignore psychological violence – the trauma caused by words, by language, by debates. Yet we constantly talk about healing in the therapist’s chambers.

There are two forms of violence that are actively promoted by business. The most obvious one is the plunder of nature. The less obvious one is the plunder of the mind. Today, the Aral Sea that once watered Central Asia has all but disappeared as humans used technology to use its waters to produce cotton. We speak of forest covers being wiped out across Amazon and even Northeast India. Oceans are polluted and filled with plastic. Large industries sustain themselves by funding democracy.

Meanwhile, the human mind is being plundered by technology such as Metaverse that seeks your mindspace. We want people to be addicted to technology so they spend all the time in virtual space – chatting, scrolling, exploring, engaged with alternate realities. Psychologists and neurobiologists are being hired to promote behaviours that enable dopamine release. In other words, successful technology is one that keeps a consumer addicted to newer hardware and software. The mind is being mined for profits.

At the heart of modern management is the belief in plunder. Its roots can be traced to the Roman military that plundered the Mediterranean world for its power. It can also be traced to European colonial powers that plundered Asia, Africa, America and Australia. Modern management is also shaped by Jesuit missions that sought to harvest souls, change the mind of people to align to their nations of God and truth. An alternate model exists if we pay attention to Jain, Buddhist and Hindu worldviews.

The Veda acknowledges that in nature the eater gets eaten. Those who eat incur debt. This debt is repaid when they are eaten. This applies to all living organisms, the plants and the trees. Humans want to eat but not be eaten. We want to consume without killing. So humans invented trade. I feed you and you repay your debt by feeding me. When I feed you, I kill for you. Thus I take away your burden of violence. You repay me by killing for me and feeding me. This shift from ‘eaters who are eaten’ to ‘feeders who are fed’ marks the shift from nature to culture, and the rise of civilisation through trade. This exchange is called yagna.

Yajur Veda defines yagna as ‘dehi ma, dadami te,’ which means ‘give me, as I give you.’ Here attention is paid to the other. You give what you receive. The point of business is not just to plunder, but also pay back. As long as compassion and generosity are seen as ‘spiritual burdens’ rather than normal practices of decent human beings, as long as Business Schools get ‘leaders’ to talk about ambition rather than contentment and generosity, we will continue to indulge in Himsa Management, and view Ahimsa Management as theoretical or at best, Gandhian politics.