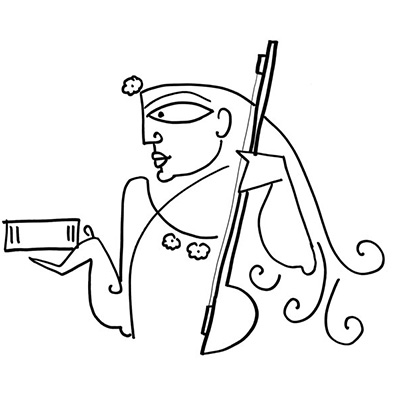 Most Hindus have reduced Saraswati to vocational training – something you learn in school to get a job. At best, it is extended to the performing arts. Saraswati is associated with books and pens and libraries, the realm of the educated. She belongs to the priests and artists, just as Lakshmi or wealth belongs to baniyas (traders) and Durga or power belongs to kshatriyas (landowners). Yet, Saraswati has more to do with identity (atma-gyan). The quest for identity – who are we? – is what distinguishes humans from animals.

Animals know who they are. Or, rather, they need to know their place in the pecking order, and food chain, if they have to survive. A rat needs to know that it becomes food for a cat, else it will not run when it sees a cat. Likewise, a weak lion needs to know it is weak, else it will be mauled by the strong lion in a fight over territory, or mate. This identity is hardwired in animals.

In humans, such hardwiring may exist but it is rendered useless by our imagination. We can imagine ourselves to be anyone we want. That is why we resent roles imposed upon us by society. We refuse to do jobs as determined by our lineage (jati/caste system) or by our biology. Our desire to follow our own dreams threatens all attempts to create predictability through law (niti) and tradition (riti).

In the Vedas, there is continuous reference to Vak, or speech, and the critical role played by language is determining who we are. For example, in Hindi, we have pronouns that reveal station in society (aap, tum, tu). Also in French (vous, tu). But not in English. Language, i.e. Saraswati, plays a key role in figuring identity. How do others address us? How do we address others?

Animals seek food (Lakshmi) and power (Durga) to get that food, or to ensure one does not become food. Without food and power, no one can survive. In social sciences, the study of Lakshmi becomes economics and study of Durga becomes politics. The study of Saraswati becomes philosophy.

At one time, study of philosophy included science. Now it does not. Today, science is focusing on the material and the measurable (saguna), while philosophy restricts itself to the non-measurable (nirguna). We study science not to understand ourselves; it has nothing to do with meaning or self-understanding. It has become about technology (tantra) that enables us to control the world.

This desire to control the world and nourish ourselves with wealth and power, stems from fear. Saraswati is also the knowledge – the philosophy – that enables us to outgrow that fear. This knowledge of outgrowing fear by understanding the true nature of the world, and so the true nature of our self is called Veda. Veda reveals that fear creates ego (aham) and outgrowing fear enables the mind to expand (brahmana), and discover our true nature (atma), which is tranquil (ananda) and full of love.

This wisdom-evoking Saraswati is what Brahma does not grasp even though he ‘creates’ the world. Instead, Brahma gets obsessed with controlling the world in fear. That is why in the Puranas, Shiva beheads Brahma. For the rest of us, she plucks her ik-tara (one-stringed lute) until we discover her.