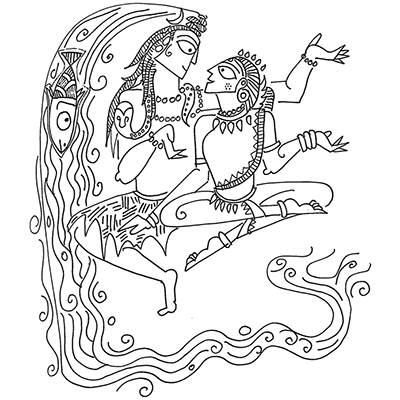 Published on 29th December, 2019, in the Economic Times

Vedas are called Shruti, that which needs to be heard. It alludes to the oral tradition via which the Vedas were transmitted. They are traditionally called revelations that were received by sages, who transmitted them to humanity, though as per historians these were just inspired poetry composed by poets to attract divine fortune and to win powerful patrons.

In the 19th century, under colonial rule, many scholars assumed that Vedic revelations were similar to the Revelations of God, in the Bible, a belief that is strongly part of Hindutva sampradaya. However, it is not the same thing.

In Sanatana Dharma, the assumption is that knowledge exists in the world, just like oxygen does. We get it if we seek it, if we are sensitive enough to receive it. The one who captures this knowledge is the Rishi. He is the one who sees and hears what others cannot see or hear. The Rishi prepares his body to listen to the vibrations of the cosmos through various disciplines like mantra, yantra, tantra and the practice of tapasya. So, the Rishis are those who become capable of seeing and hearing.

In the Puranic traditions, the concept of overhearing appears. Puranas speak of conversations of divine beings being overheard by animals and humans. Shiva and Shakti are discussing the wisdom of the tantras, when they are overheard by a snake called Patanjali, a bird or parrot called Shuka, a crow called Kakabushandi and a fish that becomes Matsyandranath. So, the tantric tradition is transmitted through those who overheard the gods. Patanjali is linked with Yogasutra, Shuka with Bhagavata Purana, Kakabhusandi with Ramayana and Matsyendranath with the Nath-jogi traditions.

The same concept occurs in the Bhagavad Gita. We do not directly know what Krishna is saying to Arjuna. We are overhearing Sanjaya who is telling Dhritarashtra, what he overhears Krishna tell Arjuna.

This concept of overhearing is found in the folklore of Ramayana as well, when Hanuman overhears Ram and Sita discussing the Vedas. Thus Hanuman realises that Ram and Sita are not regular humans; they are divine beings in human form. He realises he too has divinity within him awaiting flowering.

Thus in Hinduism, humans are obliged to be voice. Overhearing is a choice. Listening to God’s message is not. Hinduism is thus seen as voluntary, Abrahamism is obligatory. Hinduism believes you have many lives and so at the appropriate time, you will overhear and you will be wise. Abrahamism believes there is only one life to hear God’s message. Hence the sense of urgency in their stories

Modern businesses follow the Abrahamic model, with instructions, approved by Board of Directors, flowing down via the CEO to all employees. In Town Hall meetings, in annual general meetings, in regular speeches, the leader communicates his message and managers are expected to follow through. Hearing is rewarded.

And yet, people value informal networks of communication. What is overheard in meetings, in corridors, in toilets, messages that the management does not want the employees to know, or does not consider of value to be part of the message. Gossip is valued. While the authorities dismiss it, the masses value it precisely because authorities dismiss it. In fact, in corporate world what is overheard is valued much more than what is heard.

In Ramayana, Ram sends spies to find out what people are saying and when they report they are gossiping about Sita, he decides to abandon her, to protect royal reputation. Unlike dictators, he does not punish those who gossip. And unlike justice warriors, he does not argue Sita’s innocence. For he knows no one believes authority – any defence will only breed doubt, and cynicism. And so a brutal decision is taken, whereby he destroys his own personal life, no wife, no children, to protect his family reputation and to make people aware of the cost of gossip, that is overheard by royal spies.