Mercury and the Sage 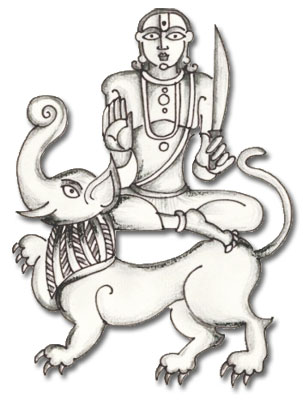 Buddhist scriptures inform us that Buddha’s birth is preceded by auspicious omens. His mother dreams of a white elephant entering her womb; it is foretold the child will either be a great king or a great sage. Buddha’s mother, Maya, dies soon after childbirth. He is raised by his aunt Mahaprajapati. He is named Siddhartha. He marries, has a child, but then is confronted with the miseries of worldly life — oldage, sickness, death — that he has been kept away from by his father, Suddhodhan. He wonders what is the cause of suffering. He goes in search of the truth. Truth makes him Buddha, the enlightened one.

While Buddha has two mothers, Budh has two fathers. His mother, Tara, goddess of the stars, and wife of Brihaspati, the planet Jupiter, elopes with Chandra, god of the moon. Brihaspati represents cold ritual rationality. Chandra represents hot passionate romance. Tara prefers the latter over the former but the gods are divided over the righteousness of the act. A great war is fought between those who side with Brihaspati who claims the rights of a husband and those who side with Chandra who claims the rights of a lover. Finally, Tara is forced to return to her husband. She comes bearing a child. Whose child is it? Both Brihaspati and Chandra claim to be the fathers. Tara refuses to reveal the secret, until the unborn child demands to know the truth. Tara says it is Chandra. This makes Chandra happy but Indra insists that Brihaspati raise the child. Law thus triumphs over love.

In some versions of the story, alluded to in the Navagraha hymn composed by Vedanta Deshika, Brishaspati curses Budh to be born as a non-man. This is the reason why in images of the Nava-graha, nine planets of astrology, Budh is sometimes portrayed as man and sometimes as a woman. He rides a Yali, a liminal being, a lion with the head of an elephant, alluding to his mercurial shape-shifting nature. Budh later marries Ila, a prince cursed to be a man on full moon nights and a woman on new moon nights. The children of these two mercurial beings establish the Chandra-vamsa, the lunar dynasty of kings, whose story is told in the Mahabharata.

Thus Budh is associated intimately with the most violent epic in India while Buddha is associated with the doctrine of self-control, meditation and non-violence. Budh may be more mythic and Buddha more historical but both have a powerful hold on the Indian imagination. They represent the two ends of the spectrum of possibilities offered by buddhi, the human intellect.