Meeting of Hearts and Minds 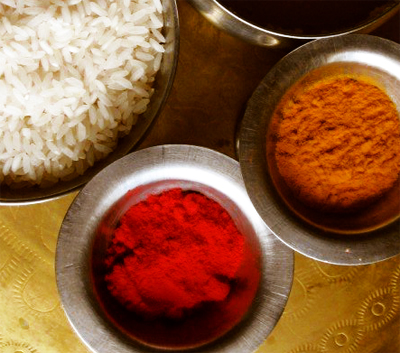 Imagine this. You are in the meeting room. Your boss has yet to arrive. People you are supposed to have a meeting with are entering one by one. They too are waiting for their boss. It’s a meeting that is very important for the both of you. This is the first meeting of a potentially crucial deal. They sit and chat with each other. They know each other. You talk to your colleagues. Both parties glance at each other, waiting to make the first move. There is nervousness, awkwardness.

How do you start the conversation? What is the best way to make a first impression or at least ignite a positive spark that lubricates the entire proceedings? Perhaps a clue can be taken from the Hindu ritual for greeting guests and gods. The offering of Haldi, Kumkum and Chaval — turmeric, red powder and uncooked rice grains. HKC, in short.

Haldi-Kumkum is a function popular amongst married women. During festival time, they gather in a house and anoint each other with turmeric and red dye. The same is done when invitations are made to a marriage. Greeting cards are often smeared with turmeric, then red dye, to render them auspicious. Strings with yellow-red color are tied around the wrist. Haldi-Kumkum is about fertility, about growth, about success, about wealth and auspiciousness.

The point to note here is the order. In rituals, the deity is always offered Haldi first, Kumkum later and finally the rice grains. This practice has been followed meticulously across the land over centuries. Like all rituals it defies logical explanation because the answer, more often than not, is symbolic. Through this ritual, something is being communicated subliminally.

The yellow of turmeric is a virile color, the color of the sun, spreading across the sky and reaching out to the earth. When sprinkled over the deity, the idea is to evoke the deity’s grace and power. Turmeric is antiseptic, destroying germs as the gods destroy demons. Red color is the color of potential energy; virgin-goddesses are draped in red saris. Red evokes the sense of the fertile red earth before the rains, holding the promise of crops. Rice is food, sustaining life, the final output that rises out of the earth and is warmed by the sun. Sun, earth, food symbolically represented by turmeric, red dye, and grains of rice. If HKC is how the devotee connects with the deity and gets divine grace, maybe this can provide a template to help strangers engage with each other.

Just as turmeric removes germs and evokes a warm feeling, the first step of interaction with a stranger is to remove all negative energy that may contaminate the space between the two. So the first step of the conversation is to make the other feel secure, less threatened and extremely comfortable. One CEO has a simple trick. After exchanging visiting cards, he usually cracks a joke, an anecdote that makes everyone laugh and establishes the CEO as a nice guy, a friend, a human being. The head of sales of another company, terrible with jokes, trusts the good old smile. If genuine,  coming from the heart, people relax and conversation starts. His colleague has a habit of saying something self-deprecating, about how he has to run to the toilet before every meeting because he feels nervous or about how the breakfast he had in the morning is making his stomach rumble. It inevitably makes people smile. “I avoid formality because it is frightening. Even if I have to wear a suit, I speak in Hindi and this I find calms people down.” Haldi makes strangers seem less menacing and more human.

Then comes the Kumkum. Having removed the negative energy with Haldi, it is time to add positive energy very proactively. The best method, says one very successful marketing manager, is to complement the person before us. “Even the gods like Stuti, or praise,” he says. Sometimes, he complements the people before him for their choice of clothes, their pen, their watch maybe, sometimes he praises the city they came from, or a work their company has done. Praise makes a person feel that people are paying attention to him, that he matters. Kumkum makes a person feel included and appreciated. It charges them to bring value to the table.

Only after the Haldi and Kumkum, comes the Chaval: the main conversation, the reason why the meeting takes place. Haldi and Kumkum create the environment where people feel relaxed, less threatened and fully charged to contribute to the meeting. Then the possibility of a fruitful successful conclusion is higher.

Often, for want of time, people go straight for the kill. Quick introductions are followed by a clarification of the agenda and the meeting starts immediately. Meetings then become a process and not a meeting of hearts and minds.

HKC, as an offering, establishes the human connection, generates energy where people are happy to exchange ideas, thoughts and opinions. The results of a meeting initiated with HKC are always positive.