Measuring Realised Souls: How Does One Know If Someone Is Awakened Or Not? 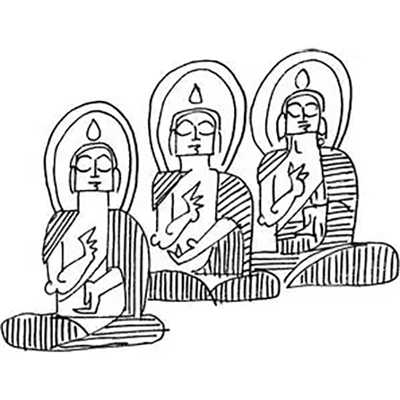 Published on 15th December, 2019, in The Economic Times

Nowadays, India is full of gurus. Most are self-appointed, but their followers insist their guru has magical powers, that he was initiated and anointed by secret mystical forces. There was a time when a holy man got his legitimacy from his lineage…

Is there a key performance indicator that points to a Buddha? How does one know if someone is awakened or not? Is there a global registration body, one that objectively declares if someone is a realised or enlightened? Is there a test to confirm if someone is truly omniscient or has experienced nothingness or has united with a higher reality?

When Siddhartha Gautama experienced awakening, we are told that he touched the earth and asked the earth to be his witness. We are told the king of serpents raised his hood and sheltered him. Brahma and Indra came down from paradise and told him to share his realisation with the world. But these are stories that come later, to establish his legitimacy as a teacher, much in the same way as a king’s legitimacy is often established in the form of a dream where the king-to-be receives a sword from a god or goddess.

Lineage is how the Pope becomes the leader of the Catholic Church, tracing his power to St. Peter, through a voting system that claims it is always moved by the Holy Spirit in declaring or modifying dogmas. Protestants do not agree with this belief and feel anyone can approach God directly via a printed Bible, without the need of the Church or the Pope.

In India, the various mathas have various religious heads, appointed, amid fierce competition, by the former leader. As in palace politics, there is negotiation and even violence. Often, monastic institutions break up because a newly appointed leader is not accepted by all. The leaders may dress in monastic robes and claim they have no attachment to worldly goods, but the monastery is often a cesspool of politics like any palace, complete with favourites and secret tunnels.

When Muhammad declared he was the chosen and final messenger of God, so informed by Archangel Gabriel himself, and that he had actually travelled from Mecca to Jerusalem and thence to Paradise, how many believed him? It took years of negotiations and finally victory in war, which led to his triumphant return from exile in Medina to Mecca, to establish him as the final Prophet of the one true god in the eyes of the local people who rejected all previously held gods, beliefs and customs and surrendered to his revelation.

Often, religious leaders are seen as realised when they perform magic. Jesus becomes Christ because his followers testified to his ability to walk on water, turn water into wine, feed hundreds with a small basket of bread and fish, and most importantly, resurrect himself three days after death.

Matsyendranath is legitimised as possessing the power of celibacy (siddha) because he can create a child, Gorakhnath, using ash cast on cow dung. Gorakhnath is legitimised because only he, like his teacher, can enter the land of women without being turned into a woman himself.

Nowadays, India is full of gurus with their own ashrams, where everyone revolves around them like planets around the sun. Few gurus have known teachers. Few are part of lineages. Most are self-appointed, but their followers insist their guru has magical powers, that he was initiated and anointed by secret mystical forces. A guru is known by his simple lifestyle and the subjective faith of their disciples that their guru is not just insightful but also has access to a secret mystical or occult world.

Or the guru is a charismatic speaker, surrounded by powerful and rich people, a great organiser, with his ashram providing all kinds of lifestyle services from meditation to massage. Their photos replace those of gods in puja rooms. They dress up in saffron, grow beards, decorate themselves with beads and gold and sit on pedestals that create a sense of awe to those who seek audience. It’s a performance, much like the temple darshan of a deity, to the sound of bells, kettle drums and conch-shells.

The bottom line is the guru or teacher, or master, is very much like a brand – you can’t measure the value. Or that which is measurable is insignificant compared to his reach and influence. It is all about trust and faith in the guru’s energising and transformative abilities, invariably endorsed by those who adore him or her.

You cannot convince an Apple user that he is being tricked by a corporation. Likewise, you cannot convince the follower of a ‘realised soul’ that he is simply being enchanted by a clever, perhaps self-deluded and even well-meaning, conman. There is no such division as authentic or pretender in the spiritual world, for there is no objective measurement of the spirit. It remains simply a matter of faith.