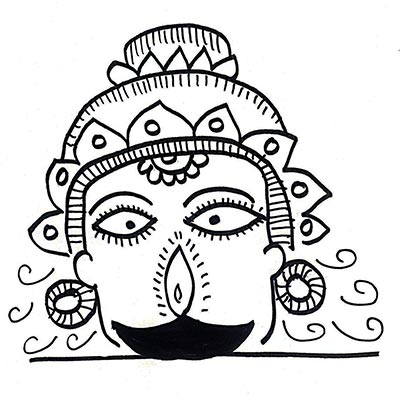 In Kalidasa’s Shakuntalayam, the rishi Durvasa gets very upset because Kanva’s daughter Shakuntala refuses to pay attention to him. She is too busy thinking of her beloved, Dushayanta. So Durvasa curses Shakuntala that her beloved will forget her. In the Tirumala Sthala Purana, even Vishnu is punished for not displaying awareness and not giving attention to a rishi. While he is the company of Lakshmi, he ignores Bhrigu who is so upset that he kicks Vishnu on the chest.

Modern management is based on the principle that only that which can be measured can be managed. Sometimes, it even goes to the extreme of assuming that which cannot be measured does not exist. Since emotions cannot be measured, modern management does not bother with it. Attempts are made to quantify emotions as suggested by concepts like ‘Emotional Quotient’ (EQ) but everyone knows that mathematical frameworks are woefully adequate when it comes to quantifying matters of the heart.

So modern management has come up with a new strategy to cover its inadequacies. It is called ‘being professional’. It basically means doing your job without indulging any emotions. It’s a mild version of psychopathic behaviour. You don’t feel, you don’t think, you just do. For behaviour is the bottom-line.

Processes are another attempt to overcome the lack of awareness or attention in employees. The job has to get done whether your mind is in it or not. So we create rules, and a system of rewards and recognition, to get people do what we want them to do, forcing them to act even if they are not aware or attentive. That is what creates the zombie like voice we hear in telemarking and customer service calls, or the over-enthusiastic artificial smiles we see in airports and hotels. You know they don’t see you. You can see it in those dead eyes.

Indian thought plays a great deal of value on awareness or attention. In Patanjali’s yoga-sutra the steps dharana and dhyana of the 8-fold path refer to awareness and attention. Awareness is about perspective and attention is about focus. Both enable humans to connect with other humans. The enable us to enjoy the task at hand and be sensitive to the feelings of others.

Every human being wants to feel he matters. And he wants to be given attention. Customers love it when service-providers lavish them with attention. Bosses love it when subordinates make them feel important. Employees love it when management shows awareness of their issues and anticipates their concerns. To be in the field of awareness and attention is critical to feel valued and loved. We love our gadgets that anticipate our moves because it deludes us that we have been ‘seen’. One reason why we love dogs is because they give us unconditional attention.

Tragically, the only place corporates value awareness and attention is when there is need to monitor truants and catch thieves. So we have over-sensitive security systems and CCTVs that watch everything and everyone. These are used not to recognize celebrate successes but to identify and rectify failures. We have glorified corporate stalking in the name of corporate security for it protects shareholder value. Such awareness and attention born of a paranoid mind is creepy to say the least. It is not what Patanjali was talking about.

No CEO can have an awareness dashboard. No annual general report will have any line time that talks about the quality of attention given by management to employees and employees to customers. We cannot force people to be aware and attentive. These are invisible intangible mental processes that are completely in human control. It can only be unleashed voluntarily. The corporate can force an employee to be behaviourally aligned, but it can never force an employee to be aware or grant attention. This is the tool used by employees to exert revenge on their bosses. A good boss needs to be aware of its absence if he wants to create a sensitive, caring and attentive organisation.