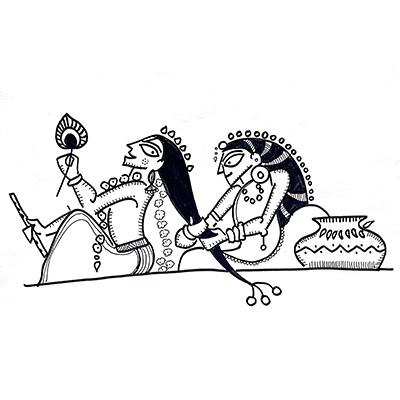 In early societies, the clan worshipped the fertile and nourishing Kula-devi or Kula-swamini, the matriarch, the mother of the tribe. She was served by Bhairava, whose relationship with her was ambiguous—lover, brother and son. He protected her, and served her, while she nourished the tribe. But, in later societies we see the rise of male gods who married multiple Kula-devis of the region, marking their territory, and becoming the symbol of divine power and kingship. Thus, we find in Odisha, eight Mangala-maa shrines around the temple of Jagannath. Together, they protect the Purushottama-kshetra of Jagannath, a shift from times when she was the sun, and everyone else were satellites around her.

In old Buddhism, Jataka tales speak of Buddha’s previous births. All of them are masculine, none feminine. His withdrawal from the world, hence all forms of desire, is seen as masculine, because the world is viewed as feminine, that which indulges desire. In later Buddhism, Buddha is more compassionate and so feminine, and so he is visualised in ‘tribhangi’ or three-fold bent pose, as Padmapani and as the androgynous Avatilokeswara.

The same applies to the female forms. All female forms are not equally feminine. There are relatively more masculine female forms like Durga and Kali, which are wild and terrifying and there are relatively more feminine forms like Gauri and Lakshmi. Saraswati appears aloof and masculine in her independence and autonomy. Lakshmi is feminine in her demanding nature. Durga is masculine because she is prepared for war. In the Durga Puja pandals of Bengal, we see a warrior goddess, who is surrounded by her children, who do not look at their mother while she is fighting. Therefore, we see the tension between the masculine warrior-form of Durga and the feminine mother-form of Durga and we wonder which one will win.

What constitutes masculinity and femininity in spirit, and form, is a wide fluid spectrum in mythology, especially Indian mythology.