Marks on the forehead 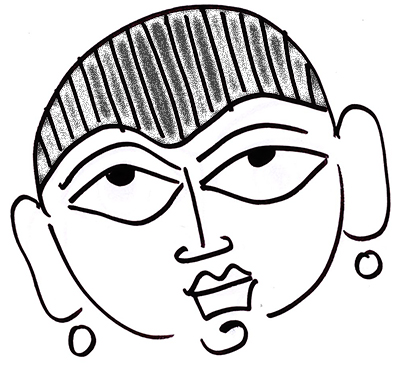 The most peculiar feature found amongst Hindus and Jains of India is the practice of painting sacred marks on the forehead. What does this mean?

Amongst very devout ritualists, marks are not restricted to the forehead. Marks are put in different parts of the body such as the ears, the forearms, the chest, the neck, even the abdomen. Each of these have ritual significance to the religious order they belong to. But the most important part to paint remains the forehead.

The forehead is special as it draws attention to the human brain, which is special because the brain alone is capable of imagination. No animal can imagine. Which means animals are afraid only when they see, smell or hear danger. Humans can be afraid by simply imagining danger. Thus in humans, fear is amplified, thanks to imagination. Our imagination then is the source of our problems. Imagination is also the source of our solution because imagination enables us to empathize and outgrow fear. This makes our brain special. The sacred marks on the forehead draw attention to this.

Vishnu’s sacred mark is vertically upwards (like the tilak) indicative of proactivity expected in a householder. It is the mark of the warrior as he marches into battle. Shiva’s mark is horizontal, indicative of passivity and inertia, the withdrawal of a hermit. Horizontal marks are also seen in sacrificial victims; it is a sign of ‘cutting the throat’.

Typically a red dot is associated with the Goddess indicative of her potent energy. The vertical tilak encased in a cup of sandal pate is associated with Vishnu marking the balance between proactivity and wisdom and three parallel horizontal lines of ash are associated with Shiva, indicating the destruction of the three worlds that humans inhabit — the natural, the cultural and the personal.

As images of holy men in the Kumbha Mela are flashed across the internet and newspapers, we see them with brightly painted foreheads. Perhaps it is time to stop and look at them, decode them, understand what they mean, for locked in them is wisdom of our ancestors awaiting discovery.

The sadhus sporting them may not know the reason. They diligently follow tradition of their gurus and so serve as transmitters, not interpreters. People often expect them to know what they are communicating, and are disappointed by the answers. In India, he who transmits a mantra (verbal communication) or a yantra (visual communication) or tantra (ritual communication) need not have understanding of what he is communicating. The important thing is that the communication continues without disruption. This is the value that blind ritualism brings to the table. We get access to unedited ideas from several generations past — like the marks on the forehead.