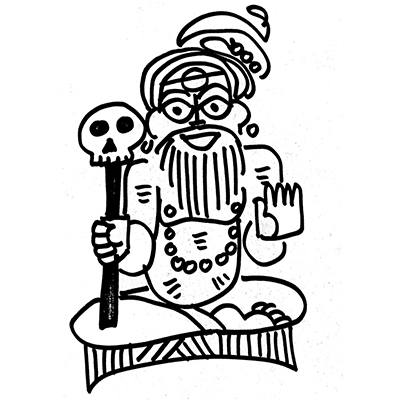 By Devdutt Pattanaik
18th May, 2018
The Economic Times blog

Everything in nature has an expiry date. Even the sun. Talk to an astrophysicist and they will tell you when the sun will eventually die. Nothing lasts forever. We know that. Yet, culture is all about ‘built to last’. The obsession with defying mortality, defying nature, being immortal is at the heart of human madness. It is what destroys society and ideology and relationships.

The richest man in the world, the most powerful technocrats of the world, are going to die, even if they are being treated by the best dieticians and gym trainers and doctors. Have they imagined a world after them? Do they imagine a world where they are not remembered at all? Do they accept that the world does not really need them? Are they okay with invalidation? Not if you follow American schools of management, where it is all about having a dream, a purpose, and leaving behind a legacy. For all our scientific temper, despite historical evidence that some of the greatest empires in the world have collapsed, that emperors have been forgotten, that scientists and their great inventions are no longer meaningful, management gurus still harp of the fiction that of immortality and permanence. For they serve the mortal man’s anxiety, rather than helping us transcend it.

Death, or expiry date, is at the heart of spirituality. Death makes us question the meaning of life, and hence makes us seekers. We turn to holy books and holy men, to gods and prophets, we value ambition and achievement and success. Death makes us anxious. Take away death, usher in immortality, and why would there be stress, for a world without death would be a world without change, without time, without memory or its loss.

It is obsession with death and therefore questions of immortality that shape the religions of the world. In Abrahamic religions, the solution offered is not to think, just follow the rules, and trust God, who is permanent. In Karmic religions, the monks speak of transcending death through introspection and meditation, or surviving through children and family name. The ancient Greeks and Romans genuinely believed that achievement ensures immortality. Bards sing your legacy forever. And this Greco-roman ‘pagan’ thought is at the heart of the American dream — the desire to be a hero who does the impossible despite odds and opposition. It’s the classic rags-to-riches story in Hollywood.

In Hinduism, the concept of expiry date was acknowledged through the concept of ashrama-dharma. Everyone speaks of varna-dharma or India’s ubiquitous caste system, but everyone seems to have forgotten the other half of this system: one that acknowledged that expiry date of your caste, as well as your life. After training (brahmacharya or student), every man was supposed to do his duties and enjoy caste privileges only till his grandson was born (grihastha or householder). Then he had teach his grandchildren his skills (vanaprastha or retired) ashrama and when they grandchildren had children of their own, he had renounce the world (sanyasa or hermit), free of caste duties and shorn of caste privileges, ready to accept death, having supported life. In modern corporate management, it means the talent pipeline — not just aspiring to be a CEO (phase 1), or being a CEO (phase 2), but preparing the next CEO (phase 3) and then living without the glamour of the CEO, knowing that every position is temporary, hence a seductive delusion, like life itself. But to let go of a powerful corporate role is tough.

Once we have tasted fame and power it is difficult to let go. And it is to stay relevant even after retirement that that government servants, even judges, it is whispered, become more corrupt as the end of term approaches.