Many identities of God 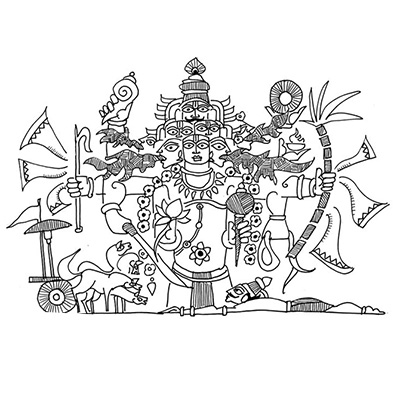 A person of Indian Origin (PIO) was once asked to identify himself. He had a US passport and had lived and thrived in USA for decades, which made him legally American. He practiced Hinduism, knew his caste and gotra that made him Hindu, a privileged one, as an activist would clarify. His worship revolved around Ram and Krishna, which made him a Vaishnavite. He spoke Punjabi, and that made him Punjabi. He was an investment banker. He was gay, married to a man as per American laws. He loved American football, and not cricket (a fact he hid from his Indian cousins). With that came other identities. What was his true identity?

I recently experienced a similar puzzle when I visited the shrine of Jagannath Puri in Odisha. I had assumed that this is a local form of Krishna, considering the images beside him are identified as Krishna’s siblings: Subhadra and Balarama. But then, I was told his consort is Lakshmi. Does that not make him Vishnu? In some traditions, Krishna is ‘merely’ an avatar of Vishnu. In other traditions, Krishna is the supreme, and Vishnu is of lower rank. But then I heard that there are many who believe Jagannath is Jagannath, unique to Odisha, and that identities such as Krishna and Vishnu were imposed later.

When you step out of the shrine, you see an image of a Jain Tirthankara on the wall. Is it Rishabha, identified as a form of Vishnu in the Bhagavata Purana? Or is it a reminder of the claim that the temple had origins in Jainism? Then I heard the story that a relic of the Buddha is placed within the image of Jagannath, making him a Buddhist deity. This story cannot be verified, but you do see images of Jagannath placed ninth in sequence in the Dasha-avatar imagery in many parts of the temple, which identifies him with Buddha, for the list of 10 avatars with Buddha as the ninth was probably introduced and certainly popularised by Jayadeva, who wrote the Gita Govinda in this temple complex and whose verses are still part of temple ritual. But recently, people have challenged this ‘Buddhist’ identification. How can Jagannath be ‘avatar’ (the descended form)? Is he not ‘avatari’ (he who descends)?

Shaivas claim that the three images in the temple are actually three Bhairavas, making the three deity forms of Shiva, rather than siblings of Krishna. Shaktas claim that the three images are of the Goddess, insisting that the image has no reproductive organs and so is simply assumed to be male. Then, there is the story of Nilamadhava, the deity of the tribal king Vishvavasu, which was claimed by Indradyumna, the king who built the first temple to Jagannath, long before the current one. That makes Jagannath a primal tribal deity, which is why many priests of the temple are identified as ‘Daitya-patis’ and are seen having tribal roots. They are clearly distinguished from Brahmin pandas.

Among academicians, there are arguments whether the Jagannath temple tradition is pre-Hindu, pre-Vedic or post-Vedic or extra-Vedic, is it the seed of Hindu traditions or the fruit of the Hindu traditions. There are arguments whether it should be called a consciousness, or a religion, or a tradition, or a sect, or a cult (a word used by European and American Indologists that infuriates the sensitive and defensive locals, as it reduces the faith to a kind of exotic heresy).