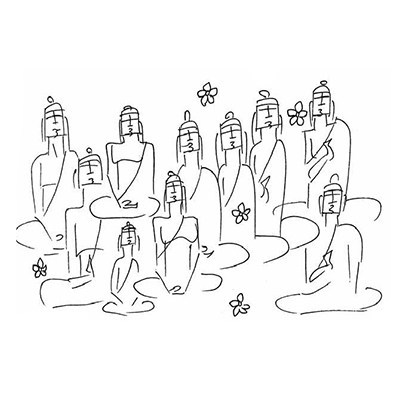 A dramatic shift happened in Buddhism roughly 500 years after the historical Buddha. This dramatic shift is the rise of what is called Mahayana Buddhism or the Great Vehicle of Buddhism. This thought perhaps emerged in Kashmir and Afghanistan and spread to China, where it was patronised by the local kings, especially the Tang dynasty in the 7th century, and eventually spread to Japan.

The fundamental difference between Mahayana Buddhism and the older school of Buddhism is that it had a far more optimistic view of life. The older school, or the ‘Theravada’ school or the ‘Abhidhamma’ school, saw the world as a place of suffering and expected people to give up desires through the practice of meditation. The Mahayana practitioners argued that through adoration and veneration of the Buddha, one is saved from the world of suffering and taken to a happy place known as ‘Buddha-kshetra’. Contemplation is replaced by veneration, and more than cessation of suffering, there is hope of happiness.

Mahayana Buddhist mythology states that there are millions and millions of Buddhas in this universe. They exist in the past, present and future. Each Buddha has a Buddha-kshetra, almost like a god with his own paradise. The most popular of all these Buddhas is ‘Amitabha’ who lives in ‘Sukhavati’ and this is located in the West of the world. The western location is significant because for China, the West meant India, and in those days, they had a glorified image of India as a land of wisdom where Shakyamuni was born, but instead of Shakyamuni they spoke of Amitabha. Worshipping the Amitabha was important and if you chanted his name repeatedly, you would be taken to this wonderful realm of Buddha-kshetra after your death, where there is happiness and beauty everywhere. The description is highly sensory and emotional, everything is aesthetically aligned and romantic and beautiful; it’s something to aspire for. Therefore, it is an optimistic view of the world.

A simpler way to understand this is to see how many people who don’t chant the Gayatri Mantra prefer to worship the Goddess Gayatri. So, they visualised the mantra and the idea of Gayatri as a five-headed goddess who sits on a lotus. The idea or the philosophy becomes the words or the mantra and the mantra become a deity that you can worship. Those who couldn’t chant the mantras, or those who couldn’t practice the philosophy, simply worshipped the image, and this is what happens in Mahayana Buddhism. This facilitated the spread of Buddhism in China where Buddha joined ranks with the Taoist sages and so became more familiar.

Mahayanists reject the idea that it was the later school and believe Buddha taught this doctrine to a few students using symbols such as lifting a lotus flower when asked a question. Thus, the Padmapani, or the lotus-holding form of Buddha, came into being. Another theory was that this knowledge was kept hidden in the land of serpents (nagas) and later revealed to the wisest Buddhist sage, Nagarjuna.