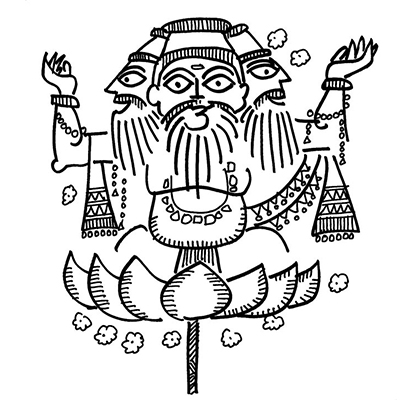 In his speech at an industrial conclave, a very reputed and successful businessman said that an entrepreneur needs to know when to create like Brahma, when to sustain like Vishnu and when to destroy like Shiva. He got a standing ovation for linking business concepts to Hindu mythology. However, as a mythologist, I realised the false equivalence.

In business, we adore the creator of a business; his images adorn the lobby and there is even Founder’s Day enshrined in the calendar of the enterprise. But Brahma, the creator of Puranas, is not worshipped.

A contrarian will immediately point to the occasional Brahma shrine in Pushkar, for example, but he will never be able to explain why no one in the corporate world worships the destroyer of a company, while Hindus do worship Shiva.

Again the contrarian will point to companies cannibalising their own products and service to stay relevant in the market, thus equating the destroyer with the creator. But the ash-smeared Shiva can in no way be equated with the yagna-performing Brahma. Any attempt to do is forced and artificial.

Brahma of the Puranas is not the same as the creator of an enterprise. One needs to ask the question: What is Brahma creating that makes him unworthy of worship?

Rather than: Why are Hindus not worshipping the creator as Christians or Muslims do? For, when we ask the right questions, we get the right answers.

In the Puranas, God manifests as the trinity (a word borrowed by English-speaking Hindu reformers from the Christians in the 19th century). There is the male triad of Brahma, Vishnu and Shiva who creates, sustain and destroy. There is the female triad of Lakshmi, Durga, Saraswati who embody wealth, knowledge, and power.

In an attempt to merge the male and female triad into three couples, we link Brahma to Saraswati, This is explained as either ‘he creates knowledge’ or ‘creator needs knowledge’. Likewise, Vishnu is linked to Lakshmi (preservers need wealth) and Shiva to Durga (destroyer needs power). The false equivalence is self-evident. Also, in temples, we often find Lakshmi and Saraswati as the brides of Vishnu, which breaks the neat symmetry.

What is not given a gender, and neither seen as verb or noun, is our self-image or ego (aham) that plays a key role in turning culture into humanity’s greatest mistake, where the mighty exploit the meek (adharma), or greatest achievement, where the mighty provide resources for the meek (dharma). This ego (aham) is what Brahma creates and Shiva destroys. Vishnu sustains it, enabling the children of Brahma move from adharma to dharma, unravelling the ego in the process to reveal our true self, atma.

Thus the Puranas using story-telling and allegories explain the same idea we find in Upanishads. And, just as without verbs and nouns that constitute language we cannot communicate meaning, we cannot express the wisdom of the sages without the gods and goddesses of the Puranas.