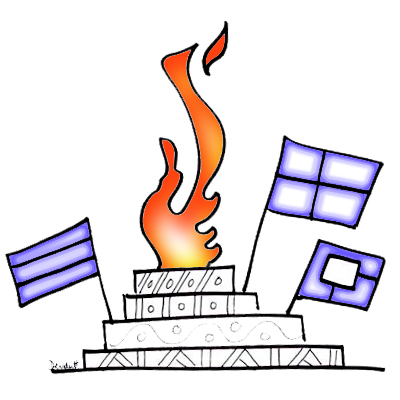 I am often asked, what is the real reason behind Diwali or Dussera? Imagine asking a mythologist about reality. But people are consumed by the desire to know why we do what we do. We are surrounded by customs and beliefs that we follow, either by choice or under compulsion, and we would really like the reason to be rational. We want to explain to our foreigner friends why we worship cows or why we fast on Mondays or why we carry flowers to a temple. We seek rationality. If an act can be made rational it somehow becomes legitimate.

And then I think about birthdays — how can cutting a cake and blowing candles be explained rationally? And then I think about the national anthem — how does standing when the national anthem is being played be explained rationally. “But it is rational,” a friend once insisted, “That is how we show respect to our nation.” And I wondered — so to show respect I have to play a song and stand up. Is that it?

Five hundred years ago there were no national flags and national anthems. So if a man from the 15th century were to come to the 21st century and watch us salute the national anthem, he would consider us strange irrational beings. Likewise, if people from the 21st century, raised in democracy, were to travel to the 15th century and see people bow before kings and kiss the rings of feudal warlords, we would find it funny.

Rituals exist in a context. People outside the context will never understand it. Those who are in it, follow it, experience it and are thus recipients of subliminal communications. I often see foreigners wondering why Hindus worship trees. This is genuine curiosity as they are from another context and find this behavior strange. When Indians travel abroad and watch men and women kissing each other passionately in public, they will find it equally strange.

The tragedy is that people who belong to one context often mock rituals of people belonging to another context. We make fun of the man who bows before what we consider stone yet we do not find it ridiculous when we blow out candles to celebrate our birthday. In one culture, white is the color of innocence, in another it is the color of widowhood. In one culture, orange clothes are worn by harlots and fools, in another it is the dress of the sage.

Humans give meanings to things and actions. That is how symbols and rituals are created. The reason is rarely rational. It is often emotional. Beyond the symbol and the ritual is a thought. Symbols and rituals are tangible manifestations of that thought. Every human being, even the most rational human being, surrenders to an irrational ritual without realizing it is actually a ritual. Wearing jeans to look casual is itself a manmade construct — a ritual of the youth.  It is important to remember this, next time we mock the rituals followed by someone else.