Making Do To Survive 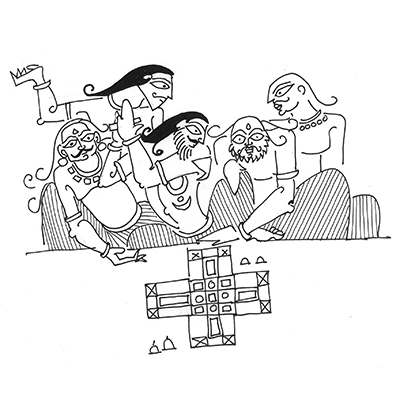 If you have no resources, a government that pretends to care and a non-existent system in place, you have to make do with what you have and align whatever forces within access, to get what you want. To do so, is to do jugaad. And jugaad has a lot to do with yoga.

My mother, like many Odias, Bengalis and Assamese, pronounced yoga as jogo. It also meant providence, the alignment of stars. The connecting not just of mind, breath and body, but also of seemingly unalignable forces to get things done. Those who did that helped childless women get babies or ensured a good harvest despite bad rain. They were the jogis, the sorcerer-mystic-occultists of the Indian countryside. They were what my mother would call resourceful people—jogadua. Someone she admired—the go-getter, the one who gets things done, no matter the odds. The jugaadu was not the trickster many an elite person made him out to be. Or maybe, it is precisely because they were elite that they could afford to mock the jugaadu, see him as a fixer, who works through the systems—like Ganesha’s rat—breaking every obstacle, finding a way.

What is jugaad exactly? It is contextual, non-replicable improvisations. Contextual—because these are solutions created on the spur of the moment using resources at the moment. Non-replicable—because unlike innovations, they are not meant to serve as a perpetual solution in every similar context. Improvisation—because they are tiny alternations, instead of dramatic transformations. Whether we call it frugal innovation, or a quick fix, it is, for most people, the only way to survive.

We often forget that what drivers see as flyovers, look like homes to the homeless. What looks like garbage to the rich, appears as a forest of food to the hungry. In India, there is so much poverty, that what is useless for some is useful to many. Opportunity is found everywhere, and from this ability to scavenge for opportunity, you create jugaad. You transform washing machines into mixers to make lassi.

It is jugaad that got the migrants home. Not the great state machinery, not the railways, but simple jugaad—as they struggled on the highways, trying to find food or water and directions back home. When you see the great ‘Migration of India’ during the COVID lockdown, remember this was possible only because of jugaad. So when somebody uses the word disparagingly, remind them of its reality.

In the US, there is always a helpline to call in for emergencies, but Indians don’t have that luxury—a national 911 equivalent known to every man, woman or child, repeated in every Bollywood movie. Each must fend for themselves. You work with whatever you have. But even when all else fails, there is one thing you can always rely upon—your wit, your buddhi. That which gives Siddhartha Gautama an upaay out of the world of sorrow and = makes him the Buddha, is the very same thing that gives the jugadu an upaay out of a crisis.

Hindu gods think laterally. In Hindu mythology, when an asura invokes Brahma and asks for immortality, he is told that immortality is impossible. So the asura asks for a boon that makes him invincible and near-immortal. He becomes all powerful. No one can defeat him, until a god comes along and finds a chink in the armour, a weak spot, an upaay that enables him to overcome the insurmountable. So the demon who cannot be killed by either person or animal is destroyed by a monster that is both man and animal. One who cannot be killed by a man, is vanquished by a woman. Indians, used to tales of such gods, are conditioned to think in terms of the bypass. Not the most efficient, but certainly effective. Not replicable, but certainly contextual.

Jugaad is the Indian way. We want to glamorize and valorize it, but it also evokes disdain, a way of short-changing the system. It is all about the fixer—a trickster who cares not for the system but instead meanders through its gaps to get things done. For the jugadu, everyone else is buddhu, a witless fool. This dark side of jugaad, abused by the rich and powerful, is very different from what the powerless and the poor on the streets of Delhi say when they manage to scrounge enough food for an evening meal—“Aaj ka jugaad ho gaya!” (Today’s resource has been managed!)