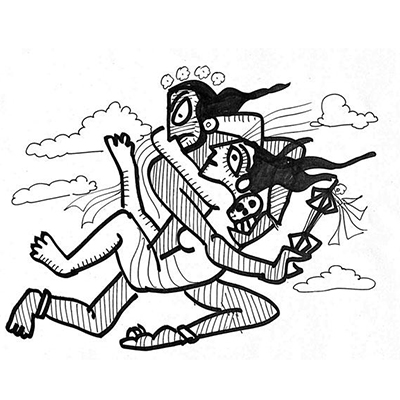 Buddhism has a vast history of 2,500 years. The earliest form of Buddhism is called Theravada Buddhism. Here, Buddha is visualised as a monk. Gautam Buddha was a prince, who abandoned his kingdom and his family in search of the answer to life’s suffering. He concluded that all suffering comes from attachment to impermanent things.

The third form of Buddhism evolved in the Tibetan region, a thousand years ago, and is called Vajrayana Buddhism. It is associated with tantric practices. One of the most characteristic features of this form of Buddhism is the adoration of 84 Mahasiddhas. Some of these 84 Mahasiddhas are kings; some of them are monks; but most of them belong to lower caste communities. They are labourers, and some, even outcastes. There are even women, two sisters, who offer their head to their guru, as they wish to escape domestic violence.

What is typical with the Mahasiddhas is that they are often seen in cremation grounds surrounded by dead bodies. Here, the cremation ground is not just a symbol of life’s impermanence, but also a magical space associated with tantra. This is where various ghouls, demons and deities emerge. They enable the Buddhist tantric/practitioner or the Mahasiddha to achieve enlightenment.

Enlightenment is a combination of not only seeing the world as it is, but also the acquisition of magical powers. The abilities to change one’s shape and size; travel through time and space; replicate oneself. They can defeat any enemy and attract anyone. Therefore, the Mahasiddhas were considered semi-magical beings venerated as much for their wisdom as their power.

Images of the Mahasiddhas are usually found around a form of Buddha known as Vajradhara. This form is considered the secret form of Buddha who taught tantric Buddhism in Tibet. He’s usually shown copulating with his consort. Images of Vajradhara and his consort constitute the yab-yum images or the sexual images found in the Himalayan Buddhist kingdoms. They are closely related to the Nath-jogi traditions of Hinduism found in much of India around 12th century, and the Sufi-pir-baba traditions that flourished in Bengal in the 16th century, all a mix of philosophy and magic.

Some believe that these are real practices involving the usage of sexual energy to attain rapid enlightenment. It is called Vajra; representing the thunderbolt method. Others believe these are metaphors. These dramatic images of the 84 siddhas are very different from the images of the multi-armed, multi-headed, Bodhisatvas. Or the old human-looking arhats of Theravada Buddhism. Typically, the Mahasiddhas are shown holding skulls in their hands, sitting in cremation grounds, consuming blood or alcohol. They are associated with images of sex and violence. They seem the very opposite of the old schools of Buddhism, making us realise how diverse the Buddhist doctrines are.