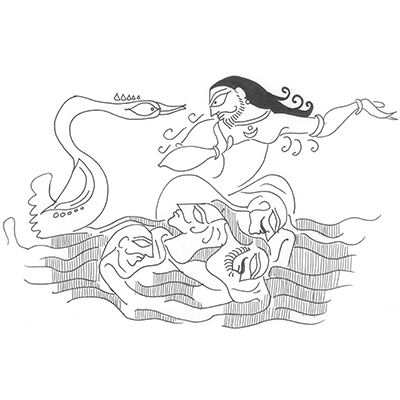 The first is the Vidura Jataka. Here we have the story of a yaksha who wants to capture the king’s minister, Vidura. He is unable to do so because the king has a big army. He then discovers that the king loves to gamble. So, he challenges the king to a gambling match. The king cannot resist, especially since the yaksha wagers on a fancy horse and a very beautiful gemstone. In the gambling match, the king loses and is forced to give away his favourite minister, Vidura. In this story, the king who gambles away what he loves most reminds us of Yudhishthira gambling away Draupadi. That the King’s minister is named Vidura, who is renowned for his wisdom, further reminds us of of the uncle of the Pandavas and Kauravas.

In the Deva Dhama Jataka, to escape the machinations of his step-mother, a Bodhisattva runs away to the forest with his brother. His step-brother, ashamed of his mother’s actions, joins the Bodhisattva and his brother in exile. While in the forest the younger brothers encounter a lake, protected by a guardian spirit. The spirit forbids them from bathing in the lake. He threatens them with death if they bathe in the lake without his permission. Yet, the youths bathe in the lake and are taken captive. The Bodhisattva comes to the rescue of his two brothers. The only way he can rescue his brothers is to answer a riddle posed by the spirit of the lake. The Bodhisattva answers the riddle. The yaksha then posed a question. Which brother would he rescue if he could choose only one brother? The Bodhisattva chooses the stepbrother. This earns the admiration of the spirit, who lets both brothers live. This story reminds us of the Yaksha Prashna episode in the Mahabharata, where Yudhishtra answers the questions of the Yaksha. Yudhishtira also asks for one of Madri’s sons to be saved, rather than Kunti’s, and earns the respect of the Yaksha.

The third story is from the Sutano Jataka. It talks about a King who, while hunting, falls asleep under a banyan tree. The tree is inhabited by a Yaksha, who has been given permission to eat anything that comes under the tree’s branches. To save himself, the king promises the Yaksha that he will send a man with a bowl of rice every day. The Yaksha will be able to eat both the bowl of rice and the human. Until one day, the Bodhisattva arrives there. This story reminds us of the Bakasura story. Only here the yaskha is pacified, not killed.

In the Ghatta Jataka, we hear of ten very powerful wrestlers. They are born of a princess but are raised by her midwife. They end up defeating the biological mother’s brother and proceed to conquer the whole of India. Due to a curse, the brothers are eventually killed. This reminds us of the story of Krishna. He is raised in secret by cowherds. He then goes on to kill his maternal uncle, and eventually witnesses the death of his entire family.