Lustful Women of the Jataka 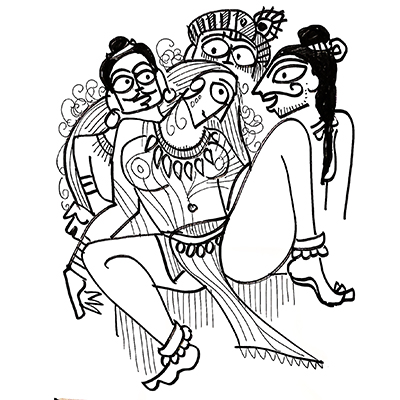 We rarely talk about it, mainly because they have been kept out of popular translations, but in the Jataka collection, which retells stories from Buddha’s past lives, there is the firm belief that women have a ravenous sexual appetite. Here are a few examples:

In Sulasa Jataka, a courtesan rescues a criminal using her wealth and influence as she desires him. But then she gets bored of him, and kills him. Kanavera Jataka tells a similar tale; here, the thief runs away fearing that a woman who killed her earlier lover to save him, could in the future kill him to secure another lover.

In Harita Jataka, an ascetic finds the queen bathing in the royal orchard. They end up having sex. When the king returns from battle and learns of the affair, he forgives them both. A similar plot is found in Mudulakkhana Jataka, but here the queen acts difficult in helping the ascetic regain his senses, give up on his desire for her, and return to the ascetic path. In Mahapaduma Jataka, the queen falsely accuses her stepson, the prince, of trying to rape her because he rejects her sexual proposition.

In Bandhanamokka Jataka, a similar story transpires between the queen, who wants her husband to be faithful but, while he is away in battle, has sex with all his messengers and even tries to seduce his minister who resists her advances. Kosiya Jataka tells the story of a wicked wife who pretends to be sick all day in order to sleep so that at night she can stay awake while her husband is sleeping and meet her lovers. Similarly in Culla-Kunala Jataka, the wife leaves her husband to have sex with lovers, washes herself and returns to bed. Her cold body under the blanket makes the husband suspicious.

Age has no impact on the libido of a woman. So, the Susima Jataka narrates the tale of an old queen mother who wants to marry her son’s young friend who is also the royal priest. In order to force the young man to marry his mother, the king gives up his crown. Asatamanta Jataka tells how the old mother of a teacher falls in love with a student assigned to take care of her.

Perhaps the most vivid tale of female infidelity occurs in the Kunala Jataka, where the Bodhisattva himself in the form of a cuckoo tells eight tales of unfaithful, lustful, untrustworthy women. This misogyny is reinforced in the book of monastic rules (Vinaya), where monks are warned to stay away from women, who can assault them in a moment of weakness. In fact, there are episodes where sleeping men are assaulted by lascivious women. Here, the woman was the predator and men were the prey.

This belief in the unbridled sexuality of women led hermits to propose laws of marriage and maternity to control the libido of women. Incredible as it sounds, but patriarchy in India clearly originated in its monastic orders.