Love in simplified Chinese is without a heart 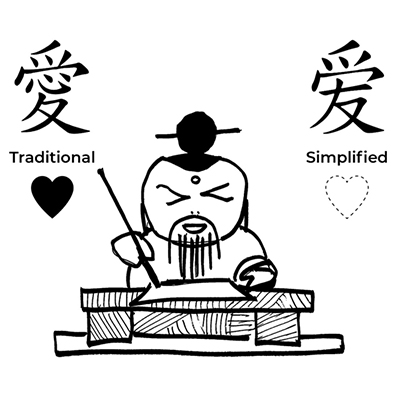 In China, there are many dialects and a lot of diversity; however, everyone is united by the use of the single script. You can read the same script, in different languages but arrive at the same meaning. This is unlike Indian scripts, where even if different languages use the same script, they look, sound and mean different things. In China, the visual script conveys a meaning that creates different sounds. In India, the visual script conveys a sound that leads to a meaning. In fact, you can read what has been written for the past 2000 years thanks to standardisation introduced by the Han dynasty. This unique feature of the traditional Chinese script is something that is not appreciated globally. Chinese culture is essentially anchored in the Chinese pictographic script. It contains the traditional wisdom of the Chinese. It became the hallmark of Chinese civilization impacting even Japan, Korea, Vietnam.

However, mainland China has abandoned this traditional Chinese script. About 50 years ago, Mainland China’s new leaders, under the influence of communism, believed that in order to educate the masses they had to simplify the Chinese script. The official reason was to make education accessible. The real reason was to brutally break away from tradition: old habits, old beliefs, old customs, old culture. For culture in China was embedded in its script.

The reform of characters was brutal. The old character for “love” had the “heart” removed and the character meaning “village” had two-thirds of its volume exacted—the part meaning “person.” So in Simplified Chinese, love has no heart, and village has no people!

When the Chinese Communist Party took power, it systematically followed the Communist doctrine and set out to destroy all things old. It destroyed Buddhism, it destroyed Confucianism, it destroyed Taoism. It rejected the past completely. They rejected the book “Three Character Classic” used by generations of Chinese to teach children read and write. The book began thus: “At birth, all are good, but habits make some bad, and others stay good.” The reason for rejecting this book was because this book did not align with the Communist party’s negative propaganda of the past.

Today, when you meet a person from Mainland Chinese you know he writes simplified Chinese, not traditional Chinese. The Chinese who live in Taiwan, and Hong Kong, are educated in traditional Chinese. The mainland Chinese because of reading simplified Chinese script has no connection with its ancient culture – those in Taiwan and Hong Kong, do. Singapore has adopted the simplified script to make life more efficient: but the Singaporean Chinese have little connection with ancient China, as they follow less of Taoism and Buddhism, and more of American Protestant Christianity, in its pursuit of wealth and power.

China today wants to be a global leader. It has aspirations of dominating the world. But it has hampered its own standing in the world, by changing the Chinese script, for now there is no continuity between Mainland China and its ancient past. The connection extends beyond China to Korea, Japan and Vietnam, a connection maintained via the script used in Hong Kong and Taiwan.

Today, we see the Chinese paying the price for this brutal decision taken half a century ago. One can see this in the way Hong Kong fights back against the regime. Hong Kong is not just fighting back for its autonomy, it is fighting for the survival of the old traditional ways: of Confucianism virtues, which was mocked by the Communist Party as being primitive, barbaric, feudal and backward. This rejection of the past is being covered up in recent times by the opening of Chinese Confucian Institutes in different parts of the world, as China tries hard to reclaim ancient China, more for tourist dollars, and less out of genuine veneration.

There is an important lesson for Indians in this. Indianness, or Indian culture, is based, for better or for worse, on the caste system. Those who reject caste-based past completely, and see it only in terms of ‘oppression’ instead of reforming or transforming it, are, in effect, trying to make a clean break from the culture of the past, just like Chinese Communists.

Shunning the past is shunning culture. Culture is what generates empathy, morality, grace, respect and a certain vulnerability, all of which are missing in the modern clinical, legal system, where rights overshadow responsibility. Rejection of culture is to embrace a mechanistic view of humanity, stripped of empathy. And that’s not good.