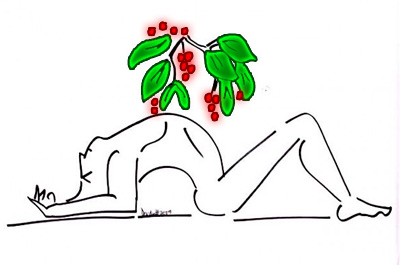 The Vikings believed in a large number of gods and these gods lived in the great city of Asgard, high in the heavens. The story goes that the most favored of all gods was one Baldur while the most hated god was a slimy trickster called Loki.

After that day, it was a common practice during mealtime for the gods in the palace of Asgard to throw things at Baldur. They could throw rocks at him, they would throw mountains at him, trees at him, but Baldur would escape without a scratch. This became entertainment for the gods. Loki saw how everyone loved playing with Baldur but no one would play with him. He felt excluded, envious and angry. Frustration kept building inside him. One day, he decided to strike.

Loki knew that Baldur’s mother had forgotten to ask the mistletoe to take the vow of never harming her son. So one day, after meals, when people were throwing things on Baldur and laughing each time he stood up unhurt, Loki gave the mistletoe to a blind god and asked him to throw it at Baldur. The herb was thrown. No sooner did it touch Baldur than he collapsed and died, to the great astonishment of everyone around.

Frey was inconsolable in her grief, so inconsolable that she demanded that the messenger-god Harmond be sent to Hel, the goddess of the death, and beg her to release Baldur.

Now Hel was the unhappy goddess as she was not allowed to enter the palace of Asgard being the ruler of the dead. She did not want to part with Baldur. But the piteous cries of Frey and the many pleas of Harmond forced her to change her mind. She agreed to release Baldur on condition that each and every living creature on earth weep for Baldur. “If he is truly loved by all as claimed, everyone will cry,” she said, “And if that happens, I will surely release him.”

When they gods heard this, they were furious. They scoured the skies and the earth for the one creature who did not cry. When they discovered it was Loki, they designed a deadly punishment for him.

They caught him and tied him under the earth  and got a venomous serpent to hang above his head. The venom of the serpent was like acid. Every time the venom fell on Loki’s face it singed his face and scarred his skin.

Loki’s poor wife therefore  spent all her time holding a bowl to catch the venom before it fell on her husband’s face; but from time to time she had to move away to rid the bowl of its contents. Every time she did this, a drop of venom fell on Loki’s face and he would writhe in agony and the writhing would manifest as earthquakes on earth.

The story draws attention to families where one child is favored over others; this leads to jealousy, sibling rivalry and unhealthy competition which ultimately leads to quarrels that destroy the household.

People were angry with the mistletoe for killing Baldur. They called it an unlucky plant. But from the land of the dead, Baldur appealed on behalf of the mistletoe. “Forgive the herb, let bygones be bygones,” he said. Since that day whenever people meet under the mistletoe, all is forgiven and everybody hugs and kisses with affection.