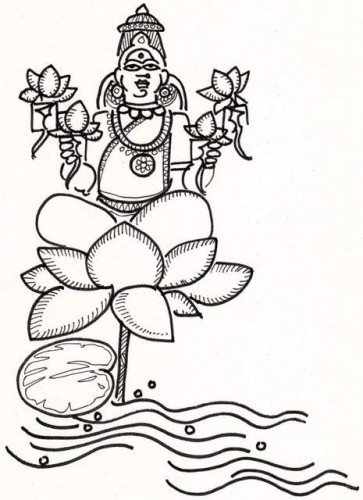 Lakshmi is the Hindu goddess of wealth. And she is a whimsical goddess. No one can catch her. No one can contain her. But there is one direction she always moves — towards Vishnu. So to get wealth into our lives, perhaps we have to be like Vishnu.

Vishnu the custodian of the world. At times, he is shown reclining on the coils of a serpent. At times, he is shown riding a bird. While seated on the serpent, he has Sarpa-drishti, or the serpent’s view — a narrow and short-termed view of things. When he is riding the bird, he has Garuda-drishti, or the bird’s view — a broad and long-termed view of things. In other words, Vishnu looks at both the big picture and the tiny details. He has a strategic view of things, across the board and over a long period of time as well as a tactical view of things, highly specific and for a limited period. Both these views exist simultaneously. This is a quality that perhaps draws Lakshmi to Vishnu.

In Garuda-dhrishti, Vishnu has a universal view of things; he knows how the universe will wax and how it will eventually wane. But in Sarpa-dhrishti, he works as Ram or Krishna in a particular context in a particular way, trying to solve a particular issue. The tactical view matters as much as the strategic view. One without the other fails to have the impact as Sidhu realized a bit too late.

When the television industry was young, Sidhu had a production house that did good business. Sidhu hired people with low or no experience and groomed them to create shows that were highly popular. As business grew, Sidhu put in rules to discipline his people. He did not like people coming in late. He did not like people taking leaves without prior notification. He ran the production house like the factory his father owned.

However, Sidhu failed to realize that the people he hired were creative people, writers and editors and directors, who resented rules and loved freedom. Given freedom, they would have loved to work long hours for a lower wage. They resented Sidhu’s management practices. Sidhu was so focussed on day-to-day management or Sarpa-drishti that he lost sight of Garuda-drishti. He did not envision that with the change in government policies, television would boom, more channels would come, which would mean the rise of more production houses. Where would the production houses of the future find talent? There was no television training school in the market! If he had long-sight, Sidhu would have realized that the first thing new production houses would do was poach people from existing production houses, such as his. He was not helping the situation by being a stern taskmaster. His employees were irritated by his demand for discipline. There was no loyalty. All they needed was an excuse to jump ship.

And that is exactly what happened. When the new production houses came, his attrition rate rose through the roof. All the people he had hired and groomed left him and became senior people in other organizations. The industry flourished but Sidhu’s production house, the source of talent, collapsed. His short-sightedness had cost him dearly.

The very opposite problem faces Sidhu’s cousin, Chatwal, who used the money he inherited to set up a restaurant close to a college. He was familiar with youth trends and so designed the place to satisfy youthful aspirations and budgets. He enjoyed Garuda-drishti, strategizing with designers and thinking about the brand. But he ignored Sarpa-drishti, the day-to-day purchase of groceries and accounting. He felt that such ‘menial’ work is for the ‘little people’ not for bright minds who have done an MBA. As a result, he ended up with a restaurant that looks good but serves terrible food. And his inventory is a mess. And the old staff, whose training he paid attention to, has left and his new staff remains untrained; ignored by Chatwal, they are destroying the customer experience with their callous attitude. While Chatwal pours over statistical data and business meta-analysis, he has forgotten the value of the moment of truth, which depends on the details. The restaurant, not surprisingly, is now bankrupt.

In organizations, the error is to associate top-management with Garuda-dhristi and bottom-management with Sarpa-dhristi. This is why there are so many gaps between vision and implementation. The guys in the boardroom need to think bottom-up. And the guys on the shop floor need to think top-down. Only then will Lakshmi walk our way.