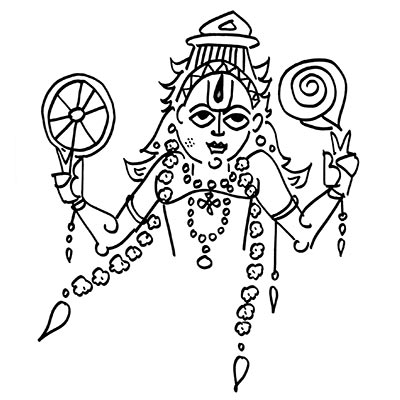 By Devdutt Pattanaik
21st July, 2014
The Times of India

Vishnu is the preserver of the world according to the Puranas. He participates in worldly life and engages with people to create a world that attracts Lakshmi, goddess of wealth. Of the many symbols of Vishnu, there are three that communicate ideas that may help those who also seek to create ecosystems that are economically viable and sustainable.

The first symbol is the tilak on Vishnu’s forehead, which is essentially a straight line drawn vertically upwards. The second symbol is the wheel or chakra in his right hand. The third symbol is the shankha or conch-shell.

The first symbol or tilak indicates a clear direction. The direction is upwards indicating that the objective is growth. A leader needs to have a clear direction that facilitates growth. The line indicates a task, a project, a finite activity with a clear objective in mind. Work and life is filled with many such lines. For example, when Mr. Mitra decided that the only way the bank could survive and appeal to the new generation of clients was by forgoing old paper-based systems for new technology based systems. This was a three-year project that would meet much resistance and demand huge change management.

The second symbol is the wheel. When a line extends itself it becomes a wheel. It reminds the leader that while the line begins with a problem and ends with a realized solution, the solution itself may turn out to be a problem that needs resolution. Thus one is trapped in the cycle of problems that have to be solved and solutions that create new problems. To assume solutions will not have problems of their own is delusion. For example, when Mr. Mitra, the CEO decided that the bank had to forgo its old ways and adopt technology solutions, he also anticipated the rise of a new power center — the IT department. No more would the CTO or CIO be simply the handmaiden of the management; he would contribute to business decisions as technology would become a key lever to achieve objectives in the future.

The wheel also reminds the leader that all things have a cyclical nature. All new things become old and have to be replaced. Thus, while paper was replaced by one technology system based on websites and portals, vendors were already talking about newer technology based on applications and movable devices such as smartphone and tablets. This was not going to be the end. There would another rotation in a few years, probably months. Nothing remains static.

The conch-shell is a spiral. And it draws attention to the human mind. Yes, life is full of projects. And life is full of cyclical events, repeating itself with unfailing regularity. But are we the same person when the change presents itself the second time in our life? Do we respond to old familiar crises as we did in the past or are we a bit more wiser? Have we learned and transformed from past experiences or are we still the same? Mr. Mitra has realized that every time he proposes a change, people will resist. At first this used to annoy him. Now, he takes it in his stride. He observed that changes in organizational structure made people insecure and so rather than making dramatic changes, he began changing things slowly to reduce the severity of the impact. He let the many repetitive events of his life expand his mind so that he was more equipped to face it when the opportunity presented itself, as he knew it eventually would.

The line, the wheel and the spiral thus are three ways of organizational thinking. The first looks at a project and its end-point. The second is aware that the end-point will create a new project as problems are embedded in solutions. The third is reflecting on the many projects and cyclical events that constitute our career and check if our many experiences are transforming us, making us wiser and perhaps more efficient in dealing with similar situations or are we still what we were when it all began.