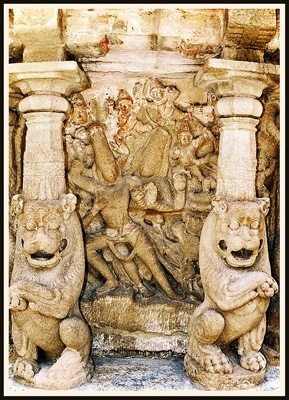 Imagine a lion but with the head of an elephant. Such a creature does not exist in nature but it does exist in mythology. It is called a Yali and is found in many South Indian temples. It is the vahana of Budh, or mercury, who like the Yali, is neither this nor that. In his verse dedicated to the Nava Grahas, Dikshitar, the 18th century doyen of Carnatik music, describes Budh as being of neuter gender and this is reflected in art – sometimes, Budh is shown as male and sometimes he is shown as female, although he is always identified as male.

The story goes that Chandra, the moon-god, fell in love with Tara, the wife of Brihaspati, the guru of the Devas and eloped with her. After a great fight, the gods forced Tara to return to her husband. Later, Tara revealed she was pregnant. Both lover and husband claimed paternity. Everyone asked Tara to reveal the secret but she refused. Finally, the unborn child, curious to know his parentage, demanded that his mother reveal all. `Chandra,’ Tara revealed after much persuasion. A disappointed Brihaspati cursed the spawn of Chandra to be neither male nor female. To make peace, Indra, god of the sky and the rains, declared that Budh would be known as the son of Brihaspati as legally he was Tara’s husband.

Ambiguity thus surrounds Budh’s sexuality as well as his parentage. Even his spouse is of ambiguous gender. Her name was Ila, and she was the daughter of Manu. Some say Ila was a son. In the Puranas, Ila is said to be once a man called Sudyumna who entered an enchanted forest and turned into a woman. Later, by the grace of Shiva and Shakti he was allowed to be male on one half of the lunar month and female in the other. Thus the god who was neither male nor female married a human who was both male and female. From this union came the lunar line of kings whose story is told in the Mahabharata.

Budh, mercury, the planet, is associated in astrology with curiosity, intelligence and cunningness. Mercury, the element, is like liquid silver (hence called quick silver) taking the shape of a metal. Thus Budh is associated with adaptability, contextualizing, shape-shifting. He can turn with the situation. Naturally, his vahana is neither a lion (symbol of masculine aggressiveness) nor an elephant (symbol of feminine grace). Even Budh-vaar or Wednesday, the day of mercury, is right in the middle of the week, three days after the start (Sunday) and three days before the end (Saturday).

Both the Yali and Budh are what are known in mythology as liminal creatures. These creatures challenge the imagination because they cannot be confined to a particular box. Budh is neither male nor female. His Yali is neither lion nor elephant. One can say they are a bit of both. Mythology has high regard for such liminal beings. The most famous liminal being is Nara-simha, the man-lion incarnation of Vishnu. In that story, an Asura tries to escape death by seeking refuge in liminal space. He says, I should not be killed by either a man nor an animal, neither a weapon nor a tool, neither inside a house nor outside, neither at day nor at night, neither on the ground nor above it. God appears as the embodiment of the liminal space – as man-lion, who uses his claws to kill the Asura on the threshold, at twilight hour, by placing him on his lap which is neither on the ground nor above it. Thus is the existence of the liminal space celebrated.

In normal life, everything is classified and kept in boxes. But creativity demands that we break free from these boxes. When that urge emerges, one has to move out of reality into the liminal zone which exists in imagination. For a long time one struggles in the space which is neither this nor that, a bit of both, until new classifications and boxes emerge and once again replace the flux with stability. Failure to acknowledge this liminal space in life leads to the end of imagination. It blocks innovation, transformation, growth. It leads to rigidity, decay and death.

No where is it more evident than in the Mahabharata where the war between the Kauravas and the Pandavas takes place over 18 days. Right in the middle, on the 9th night, the table finally turns in favor of the Pandavas. On this `middle’ point, which is neither here nor there, the Pandavas learn how to kill Bhisma, grand old leader of the Kauravas, by taking the help of Shikhandi, Draupadi’s elder brother, who was born with a woman’s body but later in life acquired male genitals. Shikhandi was neither male nor female. He was liminal. But Bhisma refused to accept such creatures – he was of the rigid old school who insisted that Shikhandi, born with a woman’s body, remained a woman. This rigidity caused his downfall. He refused to fight Shikhandi. As soon as he lowered his bow, Arjuna shot the fatal arrow, on Krishna’s instruction, from behind Shikhandi, a creature who, like Budh, the ancestor of the Pandavas, was neither this nor that but a bit of both.