Lever of Faith and Passion 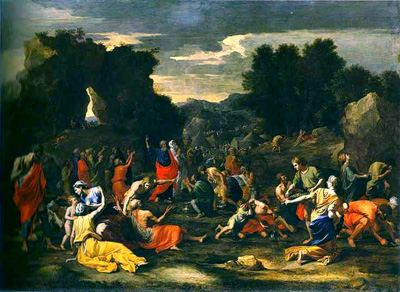 Following the many miracles that God performed through Moses, the children of Abraham, enslaved by the Pharaoh in Egypt, were convinced that there was indeed a saviour who would liberate them and take them to the Promised Land. This faith was renewed when the Sea parted, enabling all the slaves to escape their masters.

The journey to the Promised Land meant travel through the wilderness. To feed the followers, God ensured that at dawn each day the earth was covered with Manna, food from Heaven, with which bread could be made. “Just take enough to feed your family for the day,” the followers were instructed, “Not more or less. Do not hoard for more Manna will surely come tomorrow.” Despite these instructions, and the daily appearance of Manna, every day someone or the other would hoard Manna thinking — ‘just in case!’ The hoarded Manna would invariably become inedible. Still, it did not stop someone or the other in the vast numbers of followers from hoarding at least a fistful of extra Manna each day.

The level of doubt would rise and fall regularly despite reassurances from Moses and miracles of God. Once, there was so much doubt, caused by thirst and absence of water bodies in the wilderness that the followers forced Moses to use his own magical powers and produce water. Under pressure from his followers, Moses submitted. He struck a rock with his rod and produced water to quench the thirst of his followers. God frowned when this happened, for even Moses displayed lack of faith, albeit momentarily. For this act, Moses was not allowed to enter the Promsied Land. So comes this tale based on narrations found in the Talmud, (Christian) Bible and Koran.

It sounds completely illogical, but most great companies are built on faith. All data that is presented by entrepreneurs and innovators belongs to the past. All ideas and plans are located in the future. Between the known past and the unknown future are a set of assumptions. We use data and experience and testimonies and logic to prop up a vision and mission and goal, but it remains an unseen, uncharted, Promised Land. To reach it, one needs not just resources and capacity and capability (all of which can be measured) but also passion (which cannot be measured). Passion is just another word for faith. All the money in the world cannot deliver results if there is no faith.

Post recession, a training institute run by Pradeep is facing the ire of its franchisees. They want the fees to be reduced to attract students. “The students have lost faith in technical training,” they argued vociferously in the annual franchisee meet. Pradeep said, “But I have not. The market is picking up. Demand for skilled technicians is on the rise. We just have to be patient. The students will return. Have faith.” But the franchisees are shouting and screaming. They want their deposits back. They are not seeing a mad rush of enquires that existed in boom time. They are afraid that they will lose everything if they do not jump ship now.

Pradeep is spending hours showing them data: how the economy is recovering, how job search sites reveals dearth of skilled manpower, he is showing them videos of recruiters talking about the need to build a base so that one is prepared when new orders pour in. But none of these presentations are having any impact with investors. They want guarantees and proofs. Pradeep is at his wits end. Should he strike the rock, let the water out, submit to his own doubts. If he does that, he knows that he will never enter the Promised Land he so yearns for. For now, he clings to faith, which is indifferent to any evidence.