Letting go of a Part 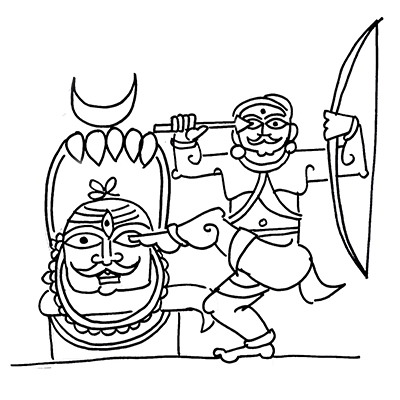 To donate an organ, two critical emotions are needed: renunciation (vairgaya) and devotion (bhakti). The one is more intellectual in nature and the other is more emotional. One allows one to detach oneself from the organ and say, “That is not me.” The other allows one to be generous towards another, “He needs that more than me.” These two emotions are very visible in the stories of Dadichi and Kannappa.

The story of Dadichi comes from the Sanskrit Purans. The devas were busy fighting the asuras who were led by one Vritra and he was impossible to defeat. The gods needed a strong weapon and nothing was stronger than the bones of a sage called Dadichi who had been practicing tapasya for hundreds of years. So Indra, king of devas, went to Dadichi and asked him to give up his bones. This would mean Dadhichi had to die so that his organs could be harvested. Dadichi agreed without a moment’s hesitation. He had attained kaivalya, supreme knowledge and so was not dependent on his flesh. He renounced his body through the yogic practice of Samadhi and let the devas claim his bones. From these bones, the celestial artisan Vishwakarma created the weapon called Vajra, or thunderbolt. Indra used it to defeat Vritra and the asuras. Every time there is thunder and lightening in the sky, people say: there is Indra striking the asuras with his Vajra, weapon created with the bones of Dadichi.

The story of Kanappa comes from Periyar Puranam, a Tamil collection of poet-saints (Nayanars) devoted to Shiva. Everyday, Tinnan, a hunter of the Boyar/Gaddi community, would visit the shrine of Shiva and share with him all that he found during his daily hunt: water from mountain springs (which he would carry in his mouth), flowers from the trees that grew on the slopes (which he carried in his hair) and the best portions of the game he hunted. One day, Shiva decided to check if his devotion was sincere. His Shiva-linga sprouted a pair of eyes; one of them started to bleed. Tinnan tried healing the bleeding eye with herbs but nothing worked so finally, Tinnan cut out his eye and replaced the bleeding eye. Then, to his shock, the other eye started to bleed. Tinnan decided to offer his other eye, but realized with both eyes gone he would not know where to place the second eye. So he placed his foot on the bleeding eye to help him locate the second eye of Shiva after he had plucked out his own other eye. Shiva was so pleased with this act of unconditional donation that he named Tinnan, Kanappa or the eye-sage.

Thus Dadichi displays renunciation when giving up his bones and Kanappa displays devotion while giving up his eye. One without the other cannot exist.