Let Me Sleep And Dream 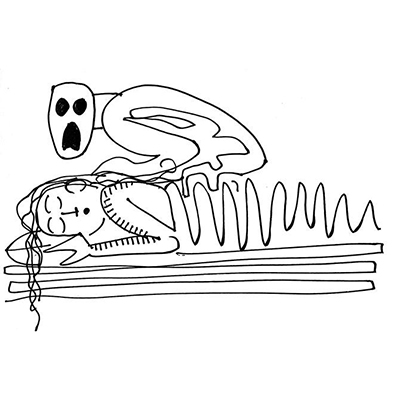 A long time ago, in the rivers and ponds of Europe, there lived a special creature called Ondine. She, one day, fell in love with a human. He was a handsome man; but not the most faithful of men. When she discovered he was unfaithful, her heart broke. In her anger, Ondine, who was a celestial being, cursed him. The curse was that he would keep breathing as long as he was awake, if he went to sleep, he would stop breathing. This became Ondine’s curse. The inability of a human being to breathe, upon falling asleep. When we sleep, we breathe naturally and we take sleep for granted. But, Ondine cast the greatest curse in the world, for it made man choose between breath and sleep.

A king was given the choice of all the gold he wanted in exchange for his sleep. The king chose sleep. He knew that without sleep, one cannot be a happy person. One may have all the gold in the world; but, if one cannot sleep, what use is that gold?

There are people who speak of demons who come to the bedroom and do not let you sleep. Try as you will, you cannot sleep because they sit on your chest or your head or your leg. They just will not let you sleep. You are awake; paralysed and can do nothing about it. You cannot get off the bed, you want to sleep but your eyelids won’t shut. You cannot go into that magical world where you forget the living world—the world of dreams. One of these demons was called a ‘mare’. This is where the word nightmare comes into being. In ancient Arabia, people believed the demons who don’t let you sleep were the djinns. It was their way of torturing you. You wanted to sleep because of exhaustion, but they would not let you sleep. They would sit on your chest, or head and not let you breathe. They would force food from your stomach to regurgitate up your throat. We all know that feeling.

Then, there is the story of the Sandman from European folklore, who would tread into children’s bedrooms in his socks. He would cast sand on your eyes and that is the crust you wake up with, in the morning. He is the one who helps you sleep because he creeps up from behind your bed and gently breathes behind your ear on your neck, until you slowly feel your ribs getting heavy and gently drift into the world of sleep. The Sandman carries with him two umbrellas. In one umbrella, there are lots of images. They are colourful, bright and full of ideas. If he opens that umbrella during the night, you will see a wonderful dream. However, if you have been naughty, he will open the second umbrella and in that one, there would be no image or colour. You will wake up in the morning, having not dreamt at all.

Folklores around sleep explore this mysterious world that claims half our lives. We still know so little about why we dream and even, why we sleep.