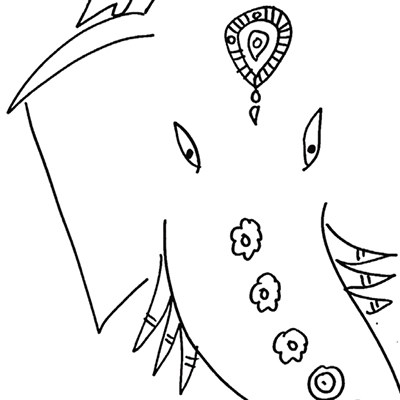 The Vedic Indra did not ride elephants. He rode chariots drawn by horses. The earliest reference to elephant-riding Indra comes to us from Buddhist texts and Buddhist art, such as the one at the Bhaja caves on Mumbai-Pune highway, which is roughly 2000 years old.

This idea was incorporated into Puranic tradition, as the old Vedic ways waned and a new form of temple based Hinduism arose, roughly 1500 years ago. The chariot-riding Vedic Indra, described in Rig Vedic hymns, was a warrior-god who killed many demons such as Vritra and who was invoked in yagna by people who sought power and prosperity from him. But the elephant-riding Puranic Indra was a man of pleasure and indulgence and entitlement, who kept asking his father to protect him from his quarrelsome half-brothers, the asuras.

Clearly this shift in the personality of Indra marks a shift in Indian civilisation, from 3000 to 2000 years ago, when nomadic pastoral people with portable shrines transformed into settled prosperous agricultural communities who preferred fixed shrines. This shift happened slowly in the Gangetic plains. This was the time when the elephant was domesticated and became symbol of kingship and power and prosperity. Only kings could afford to keep them.

We know that the Indian elephant was much sought by Persian and Greek kings as a war machine. Legend has it that fear of Indian war elephants was one of the reason that prevented Alexander from marching into the subcontinent. By the time of Ashoka, the elephant embodied kingship and so naturally came to be associated with Indra, the celestial king. In Buddhist art, we find for the first time, elephants pouring water over Shri, goddess of wealth, who sits on a lotus and holds a pot.

Thus the association of elephants with power and prosperity is reinforced. Hindus today are familiar with this image. Shri is now worshipped as Lakshmi, the consort of Vishnu. In Buddhist times, she had no consort. She was whimsical, choosing an Indra but then replacing him when a better Indra comes along. Thus the idea that fortune is fickle was established. It explained why elephant-riding Indra was eternally insecure. In the business world, leaders often begin their careers as chariotriding Indras who fight demons and win battles. However, over time, they become elephant-riding Indras who enjoy the good life, love the power and are essentially insecure, afraid that Shri will abandon them for someone better.

In Elephanta and Ellora caves near Mumbai, we find one of the earliest images of Shiva, dated to roughly 1500 years ago, the time when Puranic Hinduism starts to overshadow both Buddhism and the old Vedic ways. Shiva is shown as Gajanataka, f laying alive an elephant and dancing on its head. This rather macabre but stylistically arranged artform is clearly communicating a rejection of power and prosperity. Shiva, the ascetic, does not care for the elephant and all that it symbolises. Gajasura is described as a demon, but it is also a symbol of all the power and prosperity that comes when Shri enters Indra’s life. Everyone wants it.

Everyone craves it. But Shiva rejects it. Just as Buddha says desire is the cause of suffering. In stories and in art, we learn how Buddha and Krishna conquer the mad intoxicated elephant. These are metaphors for rejecting passions and desires for material success. Clearly, as a society, many found the avarice and insecurity of elephant-riding Indras intolerable. No temples were built for this god who was the centre of Vedic hymns. He was reduced in the new world order to a minor god, adoring Buddha, Jina and seeking the help of Shiva and Vishnu and Durga. Power and prosperity was great, but something more was needed.

This is when Ganesha appears in Hinduism, as a much beloved deity. The cut head of the elephant (identified as head of Indra’s elephant Airvata in some Puranas) is placed on the child of the Goddess and a new deity is born, a combination of the world-rejecting Shiva and the world-affirming Shakti. This god is plump indicating prosperity and has an elephant head indicating power. He holds in his hand an elephant goad (ankush) indicating the ability to control the elephant. Here the elephant form is complemented by a human body; animal urges are thus balanced by human wisdom. Prosperity and power is good provided it is not just generated and hoarded, but shared with others. That is wisdom.