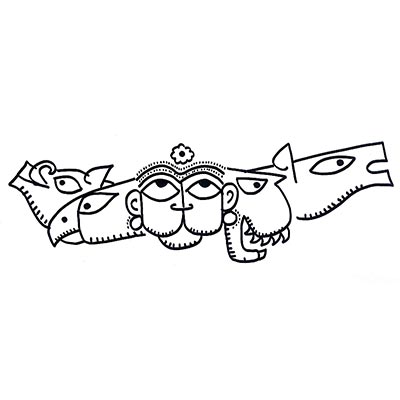 Story 1: Hanuman does not believe he can cross the sea and reach the island-kingdom of Lanka until the bear Jambavan reminds him of his childhood strength and sings songs in praise of his hidden prowess. Thus is Hanuman motivated to do the impossible.

Story 3: During the siege of Lanka, Hanuman is given the mission to find the Sanjivani herb that will save Ram’s brother. When he about to leave, Jambavan says, “Please tell him not just to find the herb but to bring it back with him. He is so obedient now that unless you clarify that he has to fetch it back, he may just find it and stay put there, awaiting further instructions.”

Story 4: Ram allows himself to be abducted by Ravan’s friend, Mahiravan. Hanuman is forced to take initiative, find Ram on his own. The burden of decision-making falls on him. He proves his mettle and rescues Ram singlehandedly, sprouting four more heads in the process, that of an eagle, a boar, a lion and a horse, thus becoming more than just a monkey. Henceforth, everyone calls him Mahabali, the mighty one.

All four stories from the epic Ramayana speak of Hanuman’s transformation. In the first story, Hanuman is a devata. He needs to be cajoled and motivated to get him to have faith in himself and achieve a seemingly impossible task.

In the third story, Ram realizes the danger of having a karya-karta, who only does what he is told to and does not take any initiative on his own. He realizes he has been focussing on Hanuman’s compliance not his competency or his capability.

In the fourth story, Ram creates a situation arises where Hanuman is forced to be proactive when it comes to taking initiative and problem solving. In other words, the karya-karta becomes a karta. This can only happen because Ram behaves like a yajaman, allows the karya-karta to take a decision, which inherently involves a risk.

Every organization has these four kinds of people:

1. The follower who has to be cajoled and motivated, even coerced, into action: the devata.

2. The reactive follower who responds to command, does what he is told to do without any need for cajoling or coercion or motivation: the karya-karta.

3. The proactive leader who takes initiative and decision and responsibility: the karta.

4. The leader who creates more leaders: the yajaman.

Rajesh, an HR head, realizes that while he has initiated a Talent Management Program, he is unable to harness talent as the CEO is very insecure and is so obsessed with control and predictable outcomes that that he reviews everything and creates so many processes that all initiative by junior managers is destroyed. Good talent feels so controlled and inhibited that they leave seeking pastures where they have more freedom to take decisions. As a result, Rajesh’s company is full of karya-kartas not kartas.

In fact, as the only karta of the company is not willing to be yajaman, many karya-kartas are becoming devatas — doing work only when cajoled or coerced to do so. Most leaders find that their team is full of devatas, followers who refuse to bear the burden of initiative and responsibility. That is why the popularity of ‘motivational talks’ by organisation on the importance and need for taking ownership.

Most leaders want a team of people who will be karya-kartas, those who follow commands unquestioningly. The power trip of being the commanding karta, telling others what they should do, is heady. But what organizations really need is yajamans, leaders who create leaders. And this is in massive short supply.

For most people, Hanuman is the ideal karya-karta, he who does what he is told to do. They see Ram as the leader who gets people to follow him. But Ram is not interested in followers. He is interested in creating leaders. He is a yajaman therefore. To be a yajaman it means allowing followers to take decisions whose outcomes you may not be comfortable with (burning of Lanka). Only then will a Hanuman be able to take initiative. For taking initiative is a huger risk. Things may not go as planned. The outcome may not be predictable. Only after a few mistakes can one have the confidence to be proactive.

To become a karta, a karya-karta needs a yajaman who stands by his decision and supports him through failure.

This article is also listed under Business, Indian Mythology, Ramayana