Lamp for the Gods 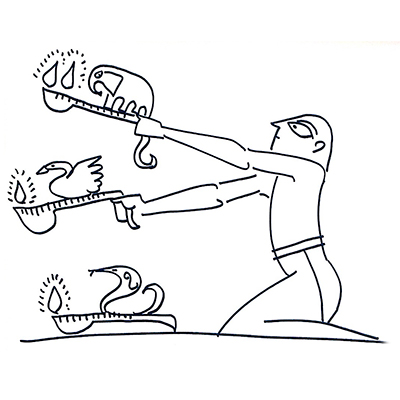 Aarti is an essential component of Hindu rituals. Lamps are waved before the image of the deity enabling the devotee to gaze upon the deity better. In other words, aarti facilitates the devotee to do better darshan of the deity. The ceremony draws attention to the philosophy of ‘looking’ that is key to Hinduism. We need to see people, and not just expect them to see us. It goes in line with the ritual of offering ‘silver eyes’ to the deity. We give the deity eyes to see us and thus remind ourselves that we have to see the world around us with better information, more empathy and greater understanding.

In South Indian temple complexes one finds this ritual also having a more social and economic relevance.

We find the ritual of aarti has been further elaborated by using different forms of lamps — lamps shaped like elephants, serpents, horses, lions, even sphinxes or half-lion creatures known as Purusha-mriga. One wonders why.

One explanation is that this was to transmit the power of the animals into the lamps. A kind of symbolic offering. Another, more rational explanation, is that as temples grew affluent, the priests created even more elaborate rituals, such as doing aarti with different kinds of lamps. This gave employment to many artisans, and many priests, and gave impetus to the local economy. It also enhanced the prestige of a temple, demarcating it from temples that were not so affluent and successful.

The scriptures state that the deity does not really want the physical lamp to be waved before it. It craves to be seen in the ‘lamp of wisdom’ that burns in the heart of the devotee. So there is really no need for the ritual. Yet, great value was placed on these lamps. Why? Wasn’t outgrowing ritual greater than performing ritual? Not, if one looks upon ritual as a key lever in the local economy.

In affluence, the rich were expected to invest wealth in elaborate ceremonies that grant employment to artisans and priests while the poor were allowed to just focus on the philosophy, and not waste their meager wealth on ceremony.

Of course, by quoting philosophy, a rich man can cleverly avoid investing his wealth in ritual but when he does that he does not support the larger community that depends on the ritual for their survival. Thus the rules of the game are different for the rich and the poor. For the poor, only philosophy is good. For the rich, the philosophy has to be accompanied by elaborate ritual, because he can afford to do it.

Thus temple rituals were not indifferent to social realities. They sought to create opportunities of employment using rituals. In many temples, the person donating a lamp was also expected to donate cows and goats to provide for the ghee. These cows and goats were given to cowherds and goatherds thus providing them with livelihood and a share in the fortune of the temple. That burning lamp supported many mouths. The temple saw the devotee as much as the devotee saw the deity.