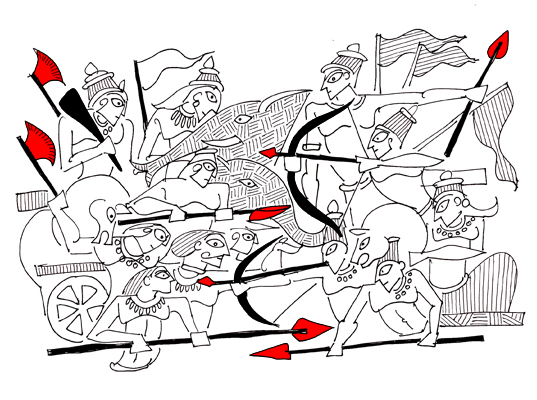 Of the 18 days of the Kurukshetra battle described in the Mahabharta, nine days were indecisive. The Kauravas , with 11 armies, outnumbered the seven armies of the Pandavas. For the Pandavas, it was critical that Bhisma, the old but very able commander of the Kaurava forces, be killed.

So Krishna decided to make Shikhandi ride on his chariot alongside Arjun. Shikhandi was born with the body of a woman which later transformed into the body of a man. Bhisma believed that a creature such as this was a woman and so refused to raise his bow against her. The Kauravas protested her entry into the battlefield but the Pandavas saw Shikhandi as a man. Arjun had no qualms about using him/her as a human shield, raising his bow at the invincible Bhisma and pinning him to the ground with hundreds of arrows.

Bhisma can be seen as a man who is paralysed by his own interpretation of a situation . But any situation can be seen in many different ways. Through alternate interpretation , it is possible to challenge anyone. Defeat is inevitable if one is unable to accommodate an alternate point of view. Had Bhisma accepted that Shikhandi was a man there was no way he could have been defeated.

Drona, the commander of the Kaurava army after Bhisma, was a ruthless killer, who broke Pandava morale by killing Arjun’s son Abhimanyu and even making his soldiers fight at night, against the rule of war. To defeat him, Krishna spread the rumour that Ashwatthama was dead. Ashwatthama happened to be the name of Drona’s son and Drona was extremely attached to him.

Ashwatthama was the reason for Drona’s life. On hearing this rumour, his heart sank. Was his son dead? Yes, said all the Pandava warriors surrounding him. Yes, said Krishna. Drona turned to Yudhishtira, the most upright Pandava. Yudhishtira knew that the Ashwatthama being referred to was an elephant. Still he told Drona – either a man or an elephant, Ashwatthama is surely dead.

In the din of the battle, looking at the petrified face of Yudhistira, Drona was convinced that his son was dead and that Yudhishtira gave him the strange answer to break the terrible news gently. He lowered his weapons. Taking advantage of this, the leader of the Pandava army raised his sword and beheaded Drona.

Drona can be seen as a man who is extremely attached to something personal . To break such a man down, that which he is attached to must be destroyed. Or at least he must be given the impression that it is destroyed. His obsession will cloud his judgement; he will not bother to delve deeper and check the facts. Many leaders have strong likes and dislikes and this can be used by corporate spin-doctors and gossip mongers to destroy relationships. Leaders have to be wary of this. They must check facts especially if the news relates to those who matter most to them. Otherwise, like Drona, they will end up beheaded.

Shalya who became commander of the Kaurava army on the last day, had, according to the Indonesian Mahabharata , a demon that came out of his ears every time he was attacked. This demon became stronger if the attack against Shalya became more intense. To defeat Shalya, Krishna suggested that Yudhishtira fight him, not with rage but with love. So Yudhishtira walked towards Shalya with great affection. The demon in Shalya became so weak that it could not even come out of Shalya’s ears. When Yudhishtira came close to Shalya, with no malice in his heart, Yudhishtira raised his spear and impaled the last leader of the Kauravas.

A powerful lesson here. There are people who become strong in confrontations. Such people must never be confronted. Their point must not be validated through arguments. The best way to invalidate them is to simply agree with them. This unnerves them. They come prepared to face all arguments and, in the absence of any, feel disempowered. Confused, they become vulnerable. People around them, seeing there is no one aruging their point will feel withdraw. Thus through agreement can a point of view be destroyed.

Barbareek is a little known character whose tale is told in many folk Mahabharatas. He was the son of Bhima by a snake princess and was stronger than all five Pandavas put together. Not wanting him to join the Kauravas, Krishna asked him for a boon. Barbareek was too nice a man to say no. So Krishna said, “Give me your head.” Barbareek immediately severed his neck and offered his head to Krishna with one request that he be allowed to see this great battle from a vantage point. Krishna therefore placed his head on a hill that overlooked Kurukshetra. At the end of the war, the Pandavas asked him who was the greatest warrior in the battlefield. Barbareek replied, “I saw no great warrior on the battlefield. All I saw was Krishna’s discuss whirring around cutting the heads of warriors and their blood washing the hair of Draupadi, who had long ago been publicly disrobed by the very same warriors.”

It is a good idea, in the middle of corporate political wrangling, to step back and see who is provoking the fight and stoking the flames. Often the two parties involved fail to realize that out there is another man making them fight for his very own agenda. So ask yourself — are you fighting your own battle in Kurukshetra or are you a pawn in someone else’s much bigger game?