Kubera, treasurer of the gods 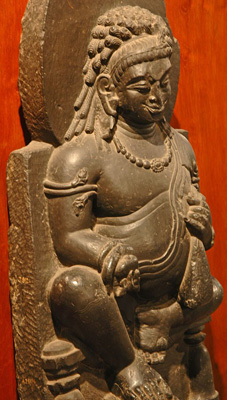 Kubera is not worshipped today as he once was in ancient India. So popular was he that even after the rise of Buddhism and Jainism, he remained a part of their mythology as guardian and fertility gods such as Manibhadra. Hindu, Jain and Buddhist stories are full of Yakshas who tell puzzles and cause trouble.

Yakshas are strange gnome-like misshapen beasts, very fat, with pot-bellies and dwarfish features, who love the company of Shiva, the ascetic, because he does not look down upon their hideous features. They are associated with water bodies like ponds. In the Mahabharata, when the Pandavas drink water from a lake without permission, they are killed by the Yaksha who resurrects them after Yudhishtira agrees to answer all the Yaksha’s questions. Kubera is the king of the Yakshas and ruler of Alakapuri, a city located in the northern direction, close to Mount Kailas, in the Himayalays.

Yakshas are also guardian of treasures. Kubera, their king, is the treasurer of gods. Some called him a form of Varuna, the god of the sea, hence father of Lakshmi, goddess of wealth. Some called him the brother of the goddess. Some even say his wives, Riddhi, goddess of growth and Nidhi, goddess of accumulation, are two forms of Lakshmi. Kubera has a mongoose in his hand, a golden mongoose that spits out gems every time it opens it mouth. The presence of the mongoose is significant, because mongoose is the enemy of the snake and snakes, especially Nagas, were believed to produce gems on their hoods. Kubera is supposed to be so rich that he is nara-vahana, which means the one who rides a human being. All other gods travel on animals, Shiva on a bull, Vishnu on a hawk, Lakshmi on an elephant, and Durga on a lion, but Kubera rides a man. This perhaps indicates how man has become a slave of wealth.

There are many stories of Kubera, of how he knew when to spend and when not to spend. Once he became so proud that he felt that his wealth could never be depleted. To teach him a lesson, Ganesha went to his house and ate all the food he had, reminding him that material wealth unlike spiritual wealth can go away. Another time, he was boasting how money can do anything. Shiva’s consort, Devi, then plucked out one of his eyes and ate it. Replace it, she said. He could not and realized wealth cannot replace all things.

It is said that Lanka, the golden city, in the middle of the southern sea was built by Kubera. Kubera’s father, Vaishrava, had two wives. One wife had given birth to the Yakshas while the other gave birth to the Rakshasas. Ravan, the king of Rakshasas, was so envious of Kubera’s prosperity that he drove Kubera north and took control of Lanka. Kubera went north and established A-Lanka, the city that was not Lanka, which became known as Alaka-puri. In Vaastu-shastra, the occult science of direction, south is associated with death and change and hence Rakshasas while the north is the direction of growth, prosperity, permanence and hence Yakshas.

In ancient times, even in Buddhist monastries and Jain shrines, Kubera images were placed for good luck and prosperity. Scholars are convinced that the notion of the pot-bellied elephant-headed Ganesha has its origin in ancient Yaksha-worship. Touching the large belly of the Yaksha was supposed to be lucky. The laughing Buddha image from Zen Buddhism is closely associated with the Yaksha-murtis of Hinduism. Yakhas are very similar to the dwarves of the Viking mythology and goblins of Irish mythology. Essentially they were earthly creatures, feared for their form, but sought for their treasures.

Yakshas were water-gods. Where there was water, there was wealth and hence Yakshas. Together with Nagas and Gandharvas, the Yakshas were creatures of the wilderness, to be found outside human settlements, once worshipped under trees, next to waterfalls, or in caves, by ancient Indians in the quest for fertility. Later as religion became more and more organized, these deities became lesser gods and relegated to the sides of the sacred pantheon. Today, we find them on temple walls, in the sides, besides the main shrine. But their time is slowly coming back as we move from a more socialist economy to a more capitalist economy. Notice how all over India, there is a rising popularity of Feng-Shui symbols like toads on a heap of gold coins, dragons, rising bamboo shoots, fat pot-bellied monks and gods of fortune. These are all water-deities. These are all Kubera’s subjects, Yakshas from the north-eastern land called China.