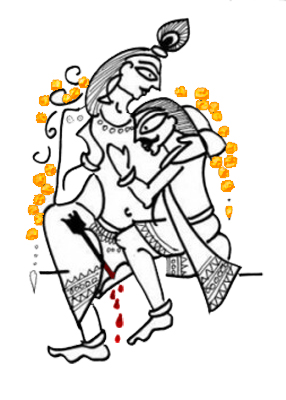 Krishna had a friend called Uddhava, a cousin just like Arjuna, the Pandava. While Arjuna was the son of Kunti, Vasudeva’s sister, Uddhava was the son of Devabhaga, Vasudeva’s brother. Born and raised in Mathura, Uddhava was a great intellectual, educated by Brihaspati, the guru of the Devas. He was amongst the first Yadava to befriend Krishna when the latter was brought by Kamsa to Mathura from Vrindavan. In some traditions, Uddhava grew up with Krishna in Vrindavan.

The two could not be more different from each other. Uddhava was raised in the city.Krishna was raised in a village of cowherds. Uddhava was educated.Krishna was uneducated. Uddhava was a serious scholar of the scriptures.Krishna was a charming rake. Uddhava silently suffered Kamsa’s excesses. Krishna overthrew Kamsa and became a rebel and hero.Though opposites, Uddhava had the wisdom to realize Krishna was no ordinary soul; he was special. And Krishna saw in Uddhava a seeker, a genuine student, not a smug academician.

Uddhava is famous for two major events. In one, he is asked to go to Vrindavan and convey to the milkmaids there that Krishna, contrary to the promise he had made, would never ever be coming back. In the other, he has to go to Dwaraka and inform everyone there that the Yadava clan has been destroyed and Krishna is dead. Both events are associated with separation, pain and death. While Uddhava is the beneficiary in the first event (Krishna comes to him), he is the victim in the other (Krishna leaves him).

When Uddhava goes to Vrindavan, the eager and anxious milkmaids mistake him for Krishna, for he comes in the same chariot that took Krishna away and as Krishna’s cousin, he has similar features. But then they realize, Uddhava is no Krishna. He does not know how to comfort. He does not know how to be emotional. He is calm and composed like a priest, passing on the news with accuracy, not understanding why the women wail like children.

Uddhava advises the gopikas to read the scriptures that speak how the world is full of change and suffering and how the wise detach themselves from worldly things. The milkmaids, led by Radha lash back. This forms the basis of the famous Bhramar geet, song of the bee, where the milkmaids equate themselves with the flower that is left behind by the bee after being drained of nectar and fragrance.Krishna, the bee, has moved on to another land, to other women, to other flowers. They do not resent him or wish him to change the course of his life but they want the right to pine for him. This is viraha bhakti, devotion born of separation. Uddhava offers them knowledge to console them, but the women say, “We do not want to be consoled. Where do we put your knowledge? Every being of ours is occupied by memories of Krishna!” Uddhava the intellectual returns humbled by the unconditional love of the milkmaids. The gyan yogi understands the bhakti yogi for the first time.

Life moves on. Uddhava watches Krishna take the Yadavas out of Mathura to Dwaraka. He watches him help the Pandavas win the war against the Kauravas. In the final chapter of Krishna’s life, a great civil war breaks out amongst the Yadavas. And Krishna does nothing to stop his kinsmen from killing each other. Then, a hunter’s poisoned arrow strikes Krishna on the sole of his left foot. Uddhava is aghast, while Krishna calmly requests him to convey the message of his demise to the women, children and aged people, his old father included, the news of the great tragic end of the clan. “How can you be so calm?” asks Uddhava. In response,Krishna says with a smile, “Why? Are you not detached?” He then reveals to his friend the Uddhava Gita also known as the Hamsa Gita, the song of the goose.

Uddhava realizes that he is very knowledgeable but not quite wise. He knows every verse of every scripture, every argument and counter agrument, but when it comes to coping with reality he is no different from the milkmaids whose wailing he frowned upon. And unlike Radha, he does not know how to accept and let go. “If you truly have wisdom, Uddhava,” saysKrishna, “you will have faith and patience.”

Faith means truly accepting, material things are bound to go but not spiritual. Krishna will leave Vrindavan eventually, Krishna will leave Mathura and Dwaraka inevitably, but Vishnu’s Vaikuntha will always be there. Radha knew this and so even when Krishna left and she wept, she never expected him to return physically; he was always with her emotionally. Uddhava had to still learn the lesson. Turn into a true goose, enjoy the waters but not let the water stick to his feathers. Getting Uddhava to realize this truth, not merely understand it, is the best gift anyone could offer a friend.