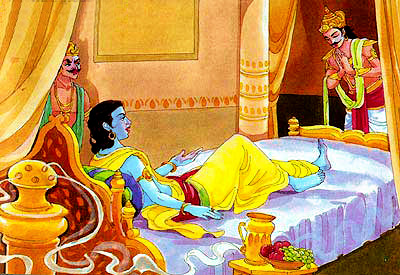 Published as One Man Army in Corporate Dossier, Economic Times, on June 27 2008.

Duryodhan, the Kaurava, went to the city of Dwaraka seeking Krishna’s support in the battle that was to be fought against the Pandavas. But he found Krishna asleep. So he sat close to the head of Krishna’s bed, waiting for Krishna to wake up.

Arjuna, the Pandava, arrived there soon after and, finding Krishna asleep, he too waited for Krishna to wake up, but he chose to sit at the foot of Krishna’s bed.

When Krishna woke up, he saw Arjuna and asked, “What do you want?”

“Hold on,” thundered Duryodhana, fearing that Arjuna would ask for what he had come to Dwarka for, “I came here first so you must ask me that question first.”

“Maybe you did,” said Krishna sweetly, “Nevertheless I will ask Arjuna the question because when I woke up I laid my eyes on him first. You should have had the humility, or the intelligence, to sit at my feet if you sought favours from me. But do not fear; you too shall leave with what you desire.” Then turning to Arjuna, Krishna asked, “What do you want — my army or me?”

Without a moment’s hesitation, Arjuna replied, “You, Krishna, only you.”

Duryodhan heaved an audible sigh of relief. For he had come to Dwarka wanting Krishna’s army and, as Krishna promised, he got what he desired. In the end Duryodhan lost the battle even though he had eleven armies on his side.

The Pandavas only had seven but with Krishna on their side, they also had intellectual capital that allowed them to skilfully manoeuver their limited material resources so as to obtain maximum and definitive results.

Every organization is like a Dwarka — one can find Krishna there, or his army. But more often than not people focus on the army, not on Krishna.

Jayesh looked at his company as a source of a monthly salary and an annual bonus. Then one day, he realized that the organization had grown indifferent to him; he sat in the corner with no real responsibilities coming his way. He was doing what he was doing ten years earlier and it seemed that he would be doing it for the rest of his life. Suddenly the salary and bonus did not matter as it did before for he realized he was not valued anymore.

If there was a decision to reduce headcounts, he would be the first to go. In panic, he went to headhunters only to be struck with a shocking reality — no one wanted him. He was not market worthy. He belonged to the old school of work and his ways were no longer valued in the job market. Companies were looking for new and different ways of thinking.

What did Jayesh do wrong? He spent 10 years in a company earning a very good salary, getting promotions as part of the routine appraisal but never really doing anything to expand his scope. He never did anything to upgrade his skills. When confronted with this, he blamed the organization for not sending him to the right training program!

Jayesh is a Duryodhan who seeks Krishna’s army and ignores the Krishna in Dwarka. He focuses on the salary and the bonuses and the perks the company offers but ignores the vast amount of intellectual capital that is floating all around him. Yes, Jayesh did learn on the job — but his learning was all about the job, restricted to what helped him do his job more efficiently and effectively. Since he handled accounts, he learnt Excel in detail by spending hours with his seniors but he never once bothered to learn Power Point or Word, because until the job crisis, such skill sets did not really matter to him.

Jayesh never bothered to learn anything beyond accounts — what was the context of his job, how did he fit into the scheme of things in the organization, how was revenue generated, what were the cost elements. He justified his ignorance by saying that the rest was not his job. He did not even learn soft skills like interpersonal skills, communication skills, negotiation skills, training skills.

Why would anyone want to put him in a senior position? He has not developed organizational thinking or strategic thinking? He never did anything to make himself worthy of any position other than the position he was. And so neither did the company bother with him nor did the market value him.

Jamshed, the marketing manager of the company to which Jayesh belongs is also like Duryodhan, but in a different context. He needs to boost his market share in various product categories and so he needs brand managers. He has six products and so he needs six managers. He already has three, he needs three more, and the company, hungry for growth, has sanctioned the budget to hire more people.

During the interviews, Jamshed came across a brilliant manager but the young man asked for more money. Jamshed could have easily hired him without affecting his total budget by cutting down on the number of extra managers he planned to hire, two instead of three, and giving the brilliant man two products to manage for the higher salary he demanded.

But Jamshed was stuck on numbers: he wanted six managers for his portfolio, no less. He valued numbers so much over intellectual capital that he let the brilliant manager go and settled for more mediocre candidates. Now he has six managers with average growth in all six products. Had he hired the brilliant young man, he could have had better growth in at least two products.

But like Duryodhan, he did not realize the value of Krishna even in defeat. An Arjuna is one who realizes the value of intellectual capital. He does not neglect material capital, of course. He does gather his seven armies. But he knows that with Krishna he can make those seven armies greater than the Kaurava eleven. As organizations grow, leaders need to ensure that, in their quest to build their armies, they do not ignore the presence of Krishna in their midst.