Krishna As a Girl 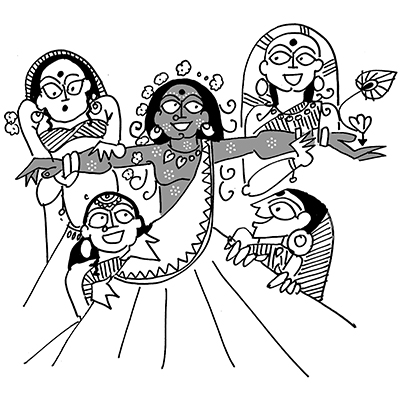 Back in the year 2011, I went to an exhibition of Sudarshan Sahoo, master stone carver from Odisha, at Jehangir Art Gallery, and saw an image of Krishna, standing with flute in hand. What caught my eye was the nose-ring worn by Krishna on the right side of the nose. Women traditionally wore it on the left side, and men on the right. I smiled as few notice the right side nose-ring on the face of Jagannath, the form in which Krishna is worshipped in Odisha. Noticing me smile, the sculptor said, “Krishna of the Raas Lila wears everything that women wear. Not just nose-rings but also earrings and a long plait. His eyes are lined with kohl and his feet are painted with alta and made red like a dancer. He is a God who is comfortable in female attire.”

In temples across India, among the many attires of Krishna is one called Strivesha, where he dresses as a woman. Krishna is shown wearing a sari and women’s jewellery. Some identify this as a form of Mohini, the divine enchantress, an avatar of Vishnu and Krishna. Others say this is Krishna dressing up like his mother Yashoda to amuse her. Still, others say this is Krishna being ‘punished’ by the gopikas, cowherd girls.

The story goes that tired of the pranks of Krishna, the women of Gokul once got together and decided to dress him as a girl. The lyrics Nar ko nari banao (make the lad a lass) is a popular Thumri composition. They grab Krishna and make him wear a skirt and blouse and paint his hands and feet with alta.To their surprise, rather than being upset or angry, Krishna participates in the activity.“More jewellery,” he demands,“ and better makeup.”Thus, what begins as a punishment ends up as a joyful activity, a lila, a game.

In another story known as Gore Gvala Ki Lila – the game of the fair cowherd – Radha and Krishna one day exchange each other’s clothes. Krishna dresses up as Radha and Radha dresses up like Krishna. This is done at Radha’s insistence, as she wants to feel like Krishna. But then she realises that even though she wears Krishna’s clothes, her heart is still Radha’s. “O Krishna, you can look like me but you will never know the pain in my heart when we separate.”To remember his beloved Radha, some say, Krishna wears Strivesha.

In still another explanation for Strivesha, it is said that after a night of intimacy, when it was daybreak, Radha and Krishna hurriedly put on their clothes only to find that they had worn the other’s. And everyone in the village wondered who this beautiful, new, dark, milkmaid was and who this handsome new cowherd was.

In Tamil Nadu, among the local transvestites and eunuchs known as Alis, there is the popular story of Aravan, a warrior who had to be sacrificed on the eve of the battle at Kurukshetra. But he did not want to die without a wife who would weep over his dead body. Since no woman wanted to marry him, Krishna turned into Mohini and became his wife, showered him with affection, and wept for him on becoming his widow. This event is enacted each year near Puducherry in the temple of Koothandavar.

The mood that Krishna evokes with this feminine adornment is one of love, affection and play, a breakaway from the rigidity of those who control and comment on society today. Little wonder then that the poet-saint, Tukaram referred to Vithal, Krishna’s form popular in Maharashtra, as Vithaai, Mother Vithal.