Krishna and the Eloping Women 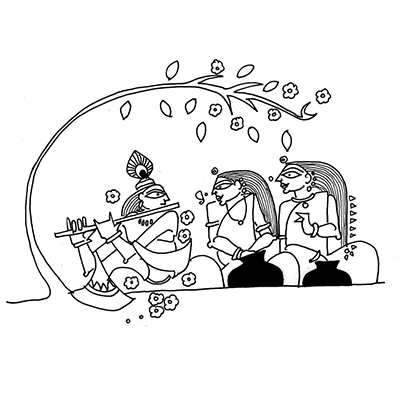 We live in times where many people cannot handle the idea of adult women choosing their own husbands. Perhaps it is time to revisit the eloping women in sacred Krishna lore.

Krishna is famous for playing the flute at night. On hearing this, the milkmaids of Vrindavan would leave their houses to dance around him in the middle of the forest. This union took place at night in the forest, outside of the village, with women, some of whom were married. This description, found in Harivamsa, Gita Govinda, and Tamil Sangam poetry, is a rather radical idea. It speaks of how love and desire transcend social structures. His relationship with Radha is mired in controversy. He is never shown marrying her. Many metaphysical explanations are offered for this. It is considered a folk idea or a tantric idea, because it challenges the patriarchal norm of Vedic puritanism..

Shiva, by destroying Daksha’s sacrifices, challenges blind puritanism. Likewise, the rule-breaking Krishna complements the rule-following Ram and contextualises love alongside law. Krishna, of all the gods, wears women’s ornaments, to entertain the women of his village. These are also put on him by his mother to protect him from the ‘evil’ eye, and by milkmaids who want to tease him in mock punishment.

He wears anklets, a nose ring, has a hair plait, and alta on the palms of his hands and soles of his feet. His bent stance, known as tribhanga, is feminine, which earns him the title “Banke Bihari”.

When Rukmani is being forced into marriage with Shishupal, she sends Krishna a note requesting him to help her elope. Krishna agrees to that wish and marries her. His sister, Subhadra, wants to marry Arjuna. Their brother, Balarama, opposes this match. But, Krishna supports her decision. He advises her that while eloping on a chariot she should hold the reins in her own hands. This would then reveal to Balarama that the elopement is of her choice and she is not being abducted.

When Balarama’s daughter Vatsala falls in love with Arjun’s son Abhimanyu, and does not want to marry Duryodhana’s son Laxmana-kumara, Krishna gets Ghatatkocha to enable the girl to escape with a man of her choice. When Duryodhana’s daughter, Lakshmana-kumari, wants to marry Krishna’s son, Samba, against her father’s wishes, Duryodhana imprisons his daughter and Samba, forcing Balarama to rescue and liberate the lovers.

Krishna’s son, Pradyumna, is abducted when he is a child. The lady, Mayavati, who raises him, in captivity, falls in love with the child. This unconventional relationship between Pradyumna and the woman who raises him is allowed in the Bhagavad Puran. The reason being that, in the previous life, they were Kamadeva and Rati. Thus, this union between an older woman and a younger boy is acceptable.

And finally, there is the story of Krishna’s grandson, Aniruddha. He is in love with Usha. Usha’s father opposes this match and imprisons Aniruddha and Usha. Krishna, along with Pradyumna, Balarama and the entire Yadav army, attack Usha’s father’s kingdom. They liberate the lovers and celebrate their union.

All these stories are where women’s choices are upheld. They stand in stark contrast to the scenario that we see unfolding in the Gangetic plains today.