King of the world 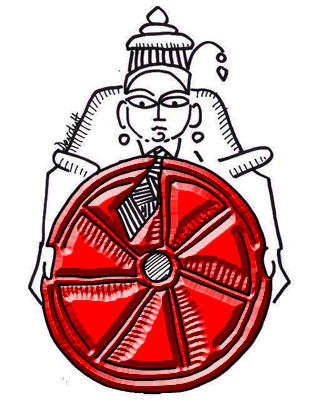 In Jain mythology, Chakravarti means emperor of the world. Chakra means a wheel. It refers to the horizon, which is circular with us in the center. The Chakravarti rules all that his eyes can see.

When he was made Chakravarti of the world, Bharata, eldest son of Rishabha, demanded that all his brothers bow to him. Rather than bow to him, they renounced the world. One brother, however, refused to bow or renounce. His name was Bahubali, the second son of Rishabha. Bharata declared war on Bahubali. To avoid unnecessary bloodshed, the elders recommended that the brothers should engage in a series of duels to prove who was stronger. Bahubali turned out to be stronger than Bharata, but a point came when Bahubali had to raise his hand and strike Bharata on the head. The idea of striking his elder brother disgusted Bahubali; so he used his raised hand to pluck hair from his own head instead, thus declaring his intention to be a monk.

In the case of Bharata, the law said that the eldest shall be king. All knew this, yet his brothers preferred renouncing the world to bowing to him. In the case of Bahubali, he knew that being a monk involves renounces the desire to dominate, and yet he found the idea of bowing to his younger brothers unacceptable.

This is what happens in organizations. Rules are made using the most rational arguments and even consensus, the aim being to realize the vision, do the task or reach the target. Yet, it is a struggle to implement them. Few see that every structure, every rule, however fair it may be, comes with its own power structure. And so we wonder why people find it difficult to simply follow the most rational of rules, or align to the process. We wonder why people yearn to be creative or drag their feet or demand motivation, despite being compensated. It stems from our animal desire to dominate, our rejection of any attempt to dominate us.

When Rahul joined as the assistant manager of a shipping firm, he was told two people, Jaydev and Cyrus, would report to him. Jaydev and Cyrus were senior by many years and they found the idea of Rahul signing their appraisal forms unacceptable. Rahul did not see what the problem was; surely the system had to be respected. Like Bahubali, however,he realized the problem when he was asked to report to the owner’s son, Pinaki, who though senior in years, was neither as qualified or as smart as him. Jaydev and Cyrus could not handle reporting to a younger man. Rahul could not handle reporting to a man he thought as less smart than him. All had to struggle between desire to dominate and the rules of domestication.