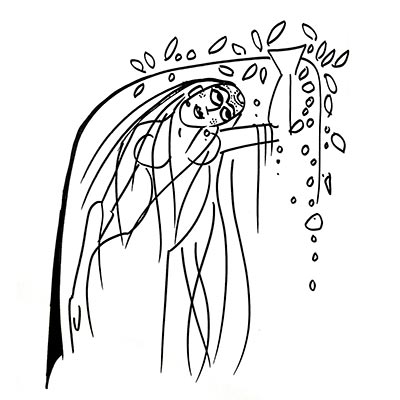 In the Puranas, whenever a man would shut his eyes to do tapasya, an apsara would appear and dance in front of him to compel him to open his eyes. The purpose of tapasya was to withdraw from the world, stoke the mind and generate mental fire, or tapa, which would burn all ignorance and reveal wisdom in its light. Success would transform the man into a tapasvin, the fire-ascetic, the fire here being the inner mental fire that burns without fuel.

But the tapasvin’s biggest obstacle would be the apsara, which literally translates as water-damsel, from the Sanskrit root, apsa, which means water. She would literally douse these flames of tapa and with her beauty enchant him into losing his concentration and opening his eyes. This loss of mental control would be very visually described as ‘spurting of semen’.

A facebook update, or a tweet, is like an apsara, provoking us to react. We want to like it, dislike it, favourite it, or retweet it or forward it, or delete it. For some tapasvins, it means getting out their hockey sticks and beating someone to death.

The story goes that when Kama, god of desire, beloved comrade of apsaras, tried to stir the senses of Shiva, the greatest tapasvin, Shiva opened his third eye and set Kama aflame. He did not appreciate the seduction.

But then Shakti, the Goddess, turned into Kamakhya or Kamakshi; in her body, Kama was reborn. She held his sugarcane bow and his flowery arrows and declared war on Shiva. But this was not a violent war. This was a war of affection. She prayed to the smarting Shiva to open his eyes and look at her. She mattered, Kama mattered, the apsaras mattered, the world from which the tapasvin withdrew mattered. Without them there could be no wisdom. Shiva understood and transformed into Shankara and became Shakti’s husband. He embraced her so tightly that she became half of his being.

We live in a world where people want to kill all apsaras. We have valorized the tapasvin who rejects seduction, provocation, allurement, pleasure, enchantment. This is the very essence of censorship.

Today, ‘ethical’ multinational companies sell fairness and beauty products. Today ‘patriotic’ Indian companies use only foreign white-skinned models with American accents to sell everything to ‘aspiring’ Indian housewives and children. We can stop them using the third eye of censorship. Or we can become wise tapasvins, who recognize that the apsara reveals our basest of instincts. She mirrors our weaknesses. She points out what we need to work on, on what fragile platform stands our self-worth and self-esteem. Indeed she is our teacher. That is why even Vishnu transforms into Mohini and enchants everyone. Through seduction he forces us to recognize our unconscious hungers.