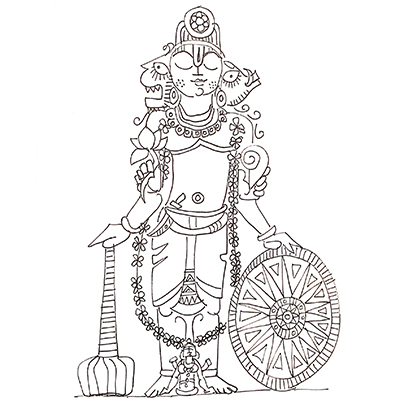 The Muslims say that Suleiman (Solomon) came to Kashmir on a flying throne (takht), sat on a hill in Srinagar, and got his djinns to clear the lake, get rid of barbarians and create a land of the true faith. But Islam actually emerged in Arabia 1,400 years ago and came to the Kashmir Valley only 800 years ago.

Before being named Takht-i-Suleiman, the hill in Srinagar was linked to Adi Shankaracharya, who visited Kashmir in the eighth century. For a thousand years before that it was a centre of Sanskrit education, where Shaivism, Vaishnavism, Tantra and Mahayana Buddhism thrived. It was a centre of Buddhism, at least since the time of Ashoka, who lived 2,300 years ago.

The history of Kashmir extends to the period when there was pit-dwelling and Neolithic farming in 3,000 BCE, followed by houses built on the ground level and pre-Aryan burial practices found in 1,500 BCE. Were they then sun worshippers, or did sun worshippers come later with the Greeks?

While Srinagar is often translated as ‘Auspicious City’ or ‘Shri Nagara’ and, thus, linked to Lakshmi, the goddess of fortune, it might also have come from ‘Surya Nagara’ or ‘City of the Sun’.

The Greeks referred to the land as Kasperia, perhaps a reference to the Vedic sage Kashyapa. It is said that the Kashmir Valley was once under water, covered by a lake, and Kashyapa with his trident created a passage in the mountains to drain the lake.

Accordingly, ‘Kashmir’ was derived from either ‘Kashyapa-Mir’ (Kashyapa’s Lake) or ‘Kashyapa-Meru’ (Kashyapa’s Mountain). This passage in the mountains is sometimes attributed to Varaha, the boar form of Vishnu, which gave rise to the name, ‘Varaha-mula’, now known as ‘Baramulla’.

Today, there are many broken temples across Kashmir — that of goddess Sharada (Saraswati), Martanda (Sun), Shankaragaurishvara (Shiva) — which serve as reminders of how Hinduism was slowly wiped out of the land, replaced by Islam that rejects idol worship. The man who did it was named Sikander Butshikhan (breaker of idols). Significantly, the word ‘buth’ which means idol has its roots in the word Buddha, as most idols in Central Asia broken by Turks were those of the Buddha.

But even when the land had Muslim rulers, the elite and aristocracy were Hindu Pandits, sandwiched in between, with Muslims masses below, creating a unique culture known as ‘Kashmiriyat’, mingling Hindu and Muslim practices, just as once Buddhism and Hinduism thrived side by side in the same land.

While beef and pork are shunned, the Pandits offer meat as offering to Shiva, a reminder of ancient Hindu practices (of course, before Hindutva claimed all Hindus are supposed to be vegetarian). We must keep in mind that the Hindu practice of eating meat may be a challenge to the older Buddhist practice of preventing animal sacrifices, implemented forcefully by Meghavarman in the second century.

Kashmir became Buddhist during the reign of Ashoka 2,300 years ago, and Kanishka, the Kushana, is said to have organised a Buddhist council in Kashmir about 1,900 years ago to collate Buddhist knowledge. It is here that the Prakrit language was replaced by Sanskrit and Mahayana Buddhism became the dominant form of Buddhism, shaping Central Asia and China.

Kumarajiva, a Buddhist scholar in Kashmir, was abducted and taken to China 1,600 years ago, where he played a key role in spreading Buddhism to the Chinese world by translating Sanskrit texts into Chinese and avoiding the earlier practice of looking for Confucian and Taoist synonyms for Buddhist terms.

Buddhism waned from Kashmir 1,500 years ago following the arrival of Huns, while Hinduism waned declined 500 years ago with the arrival of Muslim kings from Central Asia. The Buddhists were often at odds with Shaivites, with vigorous intellectual debates taking place. For common folk though, there was little difference between Buddhism and Hinduism.

After all, both involved a central male figure (Buddha, Bhairava) and many fierce goddesses (matrikas, yoginis, dakinis), who spoke of the dangers of excessive indulgence of the senses.

This was the land of Mahayana Buddhism. Nagarjuna who came from the South in the second century defeated Shaiva scholars in Kashmir. Later, Shankara would come and defeat Buddhist scholars in the 8th century.

Buddhism suffered with the arrival of the Huns around the fifth century and then Hinduism arrived with King Laladitya Muktipada of the Karkota Dynasty in the seventh century. As per 12th century poet Kalhana, in his semihistorical work Rajatarangini, Laladitya conquered much of North India from Bengal to Gujarat, returning to fend off Tibetan invaders as well as the Arab invasion during the early spread of Islam.

He returned with many Brahmins, who helped him build temples and establish gurukuls in Kashmir. This is when we find increasing evidence of the five-headed statue of Vishnu-Vaikuntha.

Shankara visited Sharada temple as part of his quest to popularise Vedanta. He preferred the formless concept of the divine, but made allowances for Shiva worship for the masses.

Shankara is said to have encountered the goddess in Kashmir, making the goddess Sharada his deity. She is a form of Saraswati and her name probably alludes to the Sharada script popular in Kashmir. Through this script, wisdom was accessed by many scholars.

Before Islamic rule, Kashmir rivalled Kashi as a seat of learning. Tantric texts, detailing complex ritual practices, were produced here and have shaped Pancharatra temple rites of Vaishnav shrines as far away as Puri in Odisha and Srirangam in Tamil Nadu. The idealistic, non-dual Kashmir Shaivism philosophy complements the rational, dualistic Shaiva Siddhanta of South India, reminding us of the northern borders of Hindu thinking.

Bilhana, the 11th century poet, said that Kashmir is the land of true poetry as it is the land of saffron that inspires poets. The great Abhinavgupta, the 10th-11th century philosopher, wrote many books, including a commentary on the Natyashastra, during which he built the philosophical foundation for introducing the ninth Rasa, Shanta Rasa.

His Tantraloka, the text that is considered his most significant contribution, tries to integrate the different ideas within the tradition of Shaivism. Abhinavgupta, unlike Shankara, was not a wandering monk.

The last king of Kashmir was Hindu, who ruled under the protection of the British. But this Hindu rule existed for only a century. Before that Kashmir was ruled by Sikhs, and before that Afghans, Mughals, and Turks.

Persian culture only entered Kashmir in the 14th century, with new forms of art emerging, such as woodwork and shawls. Most Kashmiri youth, torn between local identity and a global Islamist ideology, while being tormented by right-wing policies, do not know of their vast pre-Islamic heritage.

But are they even allowed to?