Jain Worldview Is Based On Hunger and Food 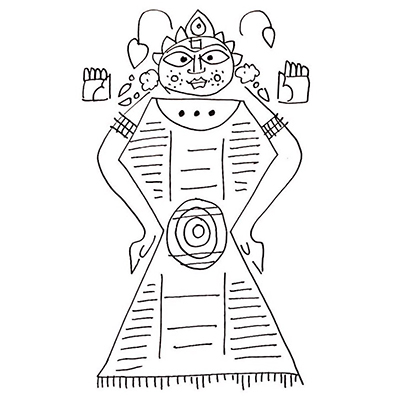 Jains are one of the most successful business communities in India. They understand demand and supply better than anyone else. Not surprisingly their mythology is based on hunger, hunger being a metaphor for all that we desire – materially, emotionally, intellectually, spiritually. The highest beings, the Jinas, are those who have conquered all hunger, and so reside in Siddha-loka. They are the accomplished (siddha) beings. The Jivas, on the other hand, are hungry, and so trapped in the world of yearning and seeking. They yearn and seek using their sensory organs (indriya). This yearning and seeking covers their spiritual body with material substance (pugdala) which drags them down in the lower realms, the various lokas and talas.

The Jain universe is imagined as a person standing with arms akimbo. This is Loka-purusha. His head is siddha-loka, where reside the Jina, who have no hunger, who have no need to take birth or experience death, whose mind is unfettered by desire, so limitless and so capable of seeing the truth of all beings (kaivalya).

The waist of Loka-purusha is the earth. For people like you and me, who can afford to read newspapers. Below us, in the feet of Loka-purusha, are the realms of the hunger. Those who have less food and so are straving. These are the pretas, the nagas, the asuras, the rakshasas. Unhappy as they have less. These are the talas, or lower realms. They are bound to the earth. Above us, in the chest of the Loka-purusha, are the lokas, or upper realms, full of being who have much more than what they need, but are still hungry and unhappy – the devas, the vidyadharas, the gandharvas, who float and fly. They have all material resources and still hungry and unhappy as they have conquered the material realm but not the spiritual realm. They need the help of the Jina to outgrow hunger to reach Siddha-loka. Hence, in art, Sakra (Indra) – king of the devas, lord of paradise – is shown bowing to the Jina.

The common man seeks to be Sakra, lord of paradise who has all the food that anyone desires, rather than Jina, the sage who has conquered hunger.

The journey from sukham to dukham is called the downward journey (avasarpini) and the journey from dukham to sukham is called the upward journey (utasarpini). Dukham lasts for a shorter duration but feels like a longer duration and Sukham lasts for a longer duration but feels like a shorter duration. Such is the nature of the mind. Unlike Buddhism, the soul (jiva) is a real permanent entity, going through multiple rebirths struggling with hunger and food. Unlike Hinduism, there is no concept of God who comes to your rescue.

Jainism speaks of practicing austerity, not meditation like Buddhists or devotion like Hindus, to overpower hunger, hence the great value placed on fasting and the monastic life. But the monks (shramana) distance themselves from routine life (shravaka). The former share their tryst with battling hunger while the latter provide them with the limited food that they need – to be consumed standing, once a day, preferably without using utensils.

Rishabha, who established civilization in this era (kalpa), once visited Sakra’s paradise and saw a damsel called Nilanjana dance. In the course of the performance, she died. But Sakra used his magic powers and created the illusion that she was alive, and all was well. Rishabha saw through the trick and decided it was time to renounce the world, and outgrow the hunger that makes even Sakra resort to magic and not accept death. He became the first Jina of this kalpa; 23 other Jinas followed him, including Suvrat in the Age of Ram, Nemi in the Age of Krishna, and Mahavira in the Age of Buddha. Since they all outgrew hunger, they have no identity in Siddha-loka. In art, they look the same. We can only differentiate them using symbols: bull for Rishabha, turtle for Suvrat, conch for Nemi, lion for Mahavira. That we need to identify them individually reveals our hunger, not theirs.