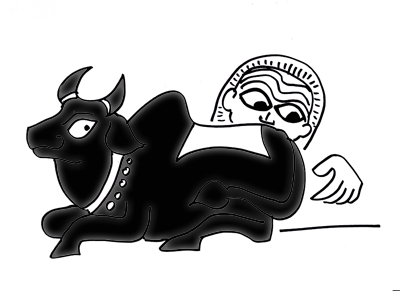 I recently visited a brand new modern Shiva temple complete with a neon sign post and a billboard. The patron of the temple wanted me to see the USP of his temple: a gigantic Nandi bull placed in the courtyard facing the main shrine. Nandi is the mount of the hermit-god. The statue made of concrete was an impressive one. As I walked around it, I asked the patron, “Is this a bull or an ox?” “It is Nandi,” he replied. So I clarified myself, “Is Nandi a bull or an ox?” This baffled the patron. It dawned on me he did not know the difference between a bull and an ox. A true blue city-slicker, with no understanding of animal husbandry practices, he was!

I had asked the question as I noticed that the scrotum (the bag of skin containing testicles) of the gigantic Nandi bull could not be seen at the back. In any traditional Shiva temple, one is often shocked by the importance placed to Nandi’s scrotum. It hangs down prominently and some devotees, including the priest, make it a point to touch it before entering the shrine of Shiva. Modern images of Nandi, made using concrete and marble and plastic and plaster of Paris, shy away from doing so. “Because,” explained one craftsman who I interrogated, “people feel embarrassed by it. They find it very vulgar. So we don’t show it anymore. Some even assume Nandi is a cow!”

We are becoming an increasingly prudish people. Prudishness laced with ignorance is a dangerous combination. Showing the scrotum of Nandi is critical. The point is not to titillate. The point is to inform all devotees that Nandi is male (not a cow) and that he is not castrated (not an ox or steer or bullock). This means he is not domesticated. Nandi cannot be used to pull ploughs or carts. He is no beast of burden. To show Nandi without his scrotum is to take away his identity.

When I explained this to the temple patron, he came up with an ingenious answer to save face, “Actually the scrotum is there, hidden under his body.” I smiled as no one can make a bull of concrete stand up.

There is a reason that Shiva’s mount, the bull Nandi, is not an ox. A bull is a useless animal; he is wild, and cannot be used to do any work. But he can do one thing that an ox cannot do: he can make cows pregnant. And unless a cow gets pregnant, and delivers a calf, she cannot give milk. So the milk of the cow depends on the intact scrotum of a bull. Farmers typically castrate all bulls and turn them into oxen, except one or two. These bulls, known as Nandi, are allowed to roam free in the streets and temples. These are dangerous temperamental creatures that one has to be wary of. It is this bull that the Matador in Spain fights.

In mythology, Shiva refuses to get married and be a householder. In other words, he refuses to get domesticated. But the Goddess appeals to him to marry her. Unless Shiva participates in worldly affairs, unless he serves her as a husband, children cannot be conceived and the world cannot be created. Shiva reluctantly agrees. He becomes the groom of the Goddess, but he is never the head of her household. He lives with her but is not the bread winner. He fathers children, but is not father to the children. Shakti becomes the autonomous matriarch. She becomes the cow, nourishing the world with her milk. He remains independent in spirit, refusing to be fettered by the ways of the world. This aspect of Shiva is what Nandi portrays as he sits benignly at his master’s doorstep.