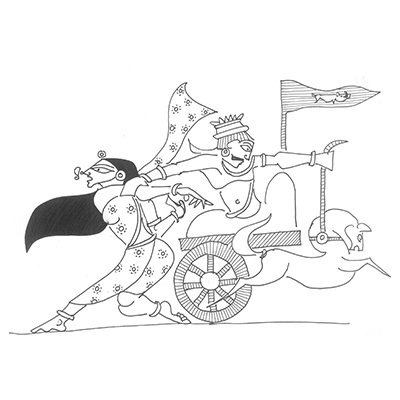 If one travels to ancient Egypt, one sees gigantic monuments of Rameses II. These celebrate his victory against the Hittites, in Syria, in 1300 BCE, in the first real use of horse-driven war chariots in the world. However, if one checks with historical records and does a bit more research, one realises that this is clear, political propaganda. The war was anything but decisive. In other words, the Rameses monuments we find in Egypt, reveal royal propaganda done 2300 years ago.

Such a rewriting of history by story-tellers and artists is not uncommon. The western world has tried very hard to project ancient Greece as the centre of democracy, equality and justice. Whereas all things that are sensual and debauched are said to originate in the East. So, the Persian Emperor was seen as authoritarian, sensual and a despot. This theme of masculine upright egalitarian West and feminine authoritarian East recurs in the conflict between Romans and Egypt in the time of Cleopatra, and later between Christians and Muslims during the Crusades, and in how Indian kings were described in European Imperialists in 18th Century.

We know these are not facts. However, such propaganda shapes history. For example, when America went to war in the Gulf, in the late 20th Century, Hollywood films such as ‘300’ reinforced the idea that ‘Persians’ are effeminate and cruel. 21st century Hindutva is so shaped by 19th century colonial discourse that it still strives very hard to prove that Indians are ‘masculine’ through authors who keep projecting Hindu gods and goddesses as ‘hypermasculine’ gym bunnies in their novels, contrary to the traditional smooth and bejewelled and gentle forms seen in temple art.

British Children are rarely told about the horrific history of the British Empire. How the Opium Trade was encouraged by the British royal family so that the East India Company could fund itself. Farmers in India were told to grow opium that was sold in China to generate capital. This destroyed Indian economy and Chinese economy, and impoverished both nations. American children are not told about Black history, how millions of people were enslaved and brought to Africa to work on farms as free labour. And how evangelists justified this by calling Black People as having the ‘mark of Cain’. And how scientists tried to justify this using fantastic theories based on racism. Upper caste Indians get upset when Dalit history is talked about, as it disturbs the view that Brahmin culture not simply intellectual, artistic and noble. In fact, even data from the Vedas showing how horses and cows were sacrificed as part of ‘yagna’ makes many orthodox Hindus furious. It’s an evidence-based history that is denied and even declared as fake.

During World War II, more Russians died than Americans and Europeans combined. Yet, if one watches Hollywood films, one gets the impression that it is the Americans who led the allied forces to victory. The contributions of the Russians was hidden from public view, because of the Cold War. Western society did not make room for homosexuals, until the Gay Liberation Movement of the 1970’s. Thus, everybody spoke of the Holocaust against Jewish people. But the systematic slaughter of queer people by Nazis never gets the same attention. Left enthusiasts love Che Guevara but argue vociferously against any evidence that show he aligned with institutional homophobia. We want history that suits us.

Politicians hate historians. Activists want to discredit scholars. Both want to control Bollywood and turn all media into propaganda. We insist that mythology or subjective truth is history or objective truth. That the word ‘itihasa’ found in Brahmana literature 2800 years ago is argued to be ‘history’ even though concepts such as ‘scientific study of past’ and ‘evidence-based history’ emerged less than 200 years ago.

In ancient India, between rituals, bards would sing the itihasa-purana. Ramayana and Mahabharata were called itihasa and it told the stories of bygone kings. Puranas by contrast told the story of gods. Itihasa was composed by men such as Valmiki and Vyasa who witnessed the events of the epics and participated in itihasa, while Puranas were stories that nobody has actually witnessed. This was the essential difference. Itihasa was memory of witnesses. Purana was simply hearsay, at best fantastic visions of seers or rishis. But today, political forces who have silenced academicians brutally tell us that Ramayana and Mahabharata are not poetic memories. They are records of actual events that took place 7000 and 5000 years ago, even though archeologists have proven that horse-drawn chariots came to be used around the world only 3500 years ago, roughly the same time as Rameses II used them against the Hittites. Thus, history retold by politicians and activists invariably turns into propaganda.