Is Lanka Located In Madhya Pradesh? 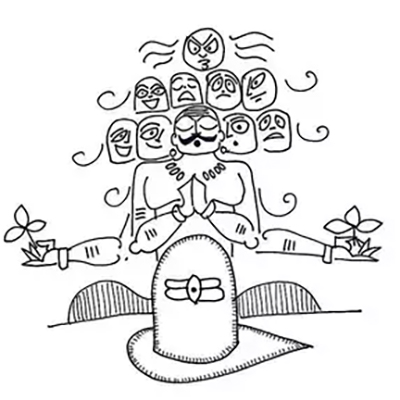 Temples dedicated to Ravana in MP, and rulers claiming descent from him in this region, indicate that Lanka may not be across the ocean as imagined, but very much within Indian territory.

Many people are convinced that the Ramayana they saw on television is history, and that Sri Lanka is Ravana’s Lanka, and that Karnataka is Sugriva’s Kishkinda. This is reaffirmed by pilgrim spots in Nashik (from where Sita was abducted), Hampi (where Ram met Hanuman), and Rameshwaram (from where Ram’s bridge was built), and the many tourists spots in Sri Lanka identified as Ravana’s palace and even Ravana’s airport. Considering the enormous violence associated with Ayodhya, the birthplace of Ram, it is best not to argue. Evidence does not matter. Faith — and politics — triumphs.

For those who value science, and so respect evidence, information found in the oldest Sanskrit text of the Valmiki Ramayana is full of curiosities.

First, let us take the case of the geographical descriptions of India provided by Sugriva to Hanuman as he moved south to find Sita. “You will see the Vindhya Mountains, and Narmada flowing west, and Godavari and Mahanadi flowing east,” he tells Hanuman. Now, if Kishkinda is in Karnataka, shouldn’t these mountains and rivers be in the north and not the south?

Second, all my life I have heard people telling me that Ravana is worshipped by south Indians. But no one tells me that the largest concentration of Ravana statutes are found in the villages and towns of Chhattisgarh. There are temples in Vidisha and Mandasaur, in Madhya Pradesh, dedicated to the rakshasa king. This is not a recent phenomenon. A Gond king, in the 15th century, issued a coin calling himself Paulastyavamsa, meaning descendent of Ravana who was a descendent of Rishi Paultastya. Even earlier, an inscription from the Gupta period found in Bastar has King Someshwar of Sonepur, calling himself Paschima-Lankadhipati, or Lord of Western Lanka.

Third, the oldest texts and inscriptions found in Sri Lanka do not refer to the island as Lanka or Trikuta. The earliest immigrants to Sri Lanka, in 5th century BCE, probably came from India led by prince Vijaya, probably from Odisha or Bengal, and he identified the island as Tamrapanni, or the copper-coloured island, which later the Greeks referred to as Taprobane. They speak of how the island was inhabited by dangerous yakshas, whose queen marries the leader of the immigrants. This trope of immigrants marrying a yaksha or a naga queen is found across Southeast Asia as Indian sailors migrated and traded with that region. The word ‘lanka’ simply means island. ‘Sri Lanka’ means prosperous island, and was a name used by the Independence movement that rejected the colonial name ‘Ceylon’. The origin of Ceylon is a complicated one. It is derived from Serendip (that gives us the word ‘serendipity’ or pleasant coincidence), which is derived from ‘Sinhala-dvipa’ or the island of lions, which is odd since lions are not found in Sri Lanka. But these lions refer to the royal symbol of kings who came from Kalinga, who were said to be descendants of a woman who mated with a lion — a corrupt version of the ‘worshippers of Narasimha’ or the man-lion form of Vishnu that was popular in Gupta times (300 CE). Words like Lanka as well as Sinhala — often for two different places — start being used after this period.

Fourth, the sala tree (shorea robusta) is found only in north and east India. But the Valmiki Ramayana says it is found in Kishkinda and Lanka. Lakshman refers to “cold winter winds from the North” in Panchavati. But this geographical phenomena occurs only north of the Vindhyas, not south. The ‘sea’ isolating Lanka is described as filled with crocodiles (makara) which is found in the tributaries of the Narmada, surrounded by caves, as repeatedly mentioned in the Ramayana. These were clearly shallow, marshy waters which is why a ‘bridge’ was built and boats were avoided. Most people know the Ramayana from its regional versions. For example

Hindutva favours Ram Charit Manas, composed in the 15th Century. These ignore the natural details of Sanskrit of the Valmiki Ramayana and are full of poetic license. Hindutva insists that Hinduism emerged fully developed in every corner of India 12,000 years ago. The Dharmashastras, however, reveal that originally Aryavarta referred only to the Gangetic plain, then north India, and finally — by the time Manusmriti was composed — came to include south India too. As Brahmins migrated and Hindu ideas spread, and more and more kings patronised Hinduism, the idea of Lanka kept spreading beyond the southern borders. By the 10th Century, when the Kamba Ramayana was written in Tamil, Rameshwaram was claimed by Shaivas and Vaishnavas, and the idea of Lanka being the island beyond became popular amongst Tamil fishermen, merchants and traders. Buddhist literature also spoke of how Buddha went to Lanka to clarify doubts of Ravana. Just as we find caves and lakes linked with Ram across India (Banganga in Mumbai for example), the location of Lanka kept moving southwards, from the tribal belt of central India to across the sea to Sri Lanka. This makes sense to those with a scientific mindset. For the rest, we have the fabulous Hindutva history, favoured by the powerful.