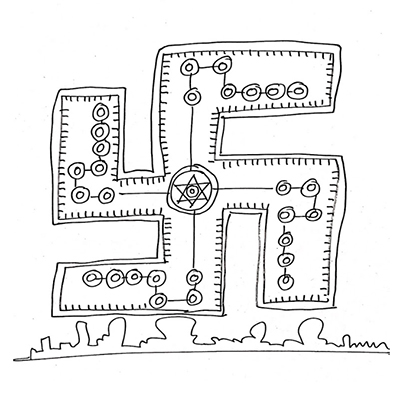 Hinduism is called Sanatan Dharma in popular understanding. It is based on the line from the Bhagavad Gita where Sri Krishna describes the wisdom he is sharing assanatan, which means timeless. Any attempt to ask when this idea was articulated in history is seen by Hindutva politicians as a challenge to Hinduism, and a Hindu-phobic attack. They yell: the Mahabharata war took place 5,000 years ago, and so this idea is at least 5,000 years old.

This puts historians in a fix as there is no archaeological evidence of any great war that took place in India 5,000 years ago. The Rig Veda refers to a war of Bharatas, but it is not the war of Kauravas and Pandavas, and the hymns that speak of it are not more than 3,500 years old as per linguistic studies. If one accepts the astronomical information in the Rig Veda without question, we can argue that the Vedas were written over 7,000 years ago — but that still is not timeless!

Many gurus who preach Vedanta insist that the Vedas are apaurusheya, or not of human origin. But this idea does not come not from Vedic hymns. It comes from Brahma Sutras, which are about 2,000 years old, and became really popular a thousand years ago thanks to South Indian philosopher-saints Shankara, Ramanuja and Madhva. When historians give evidence for their statements, the troll armies of Hindu leaders and even Hindu gurus hound them, insisting that the ideas existed even 10,000 years ago. No one likes be trolled and hounded into submission and so historians withdraw. But that does not make timelessness of Hinduism a measurable fact. It remains a belief.

If we step out of the Hindu bubble we will realise that all the religions in the world see themselves as timeless. It is the nature of religion to be ahistorical.

If someone asks about the origin of Islam, an academician will say it started 1,400 years ago with Muhammed. However, a devout Muslim will insist that it came with creation itself, with Allah sharing his wisdom with the world through prophets. What we call Islam today is the latest communication of a timeless doctrine through the final prophet, who is Muhammad.

In Mahayana Buddhism, the historical Buddha is but one of infinite Buddhas. Buddhism is seen as sanatan, timeless, revealed from time to time by a Buddha. There was a Buddha before, and there will be a Buddha later. There are infinite Buddhas in infinite worlds.

Jains believe that Jainism is sanatan, existing forever. It is revealed from time to time by great sages known as Tirthankar. In every cycle of time (kalpa) we are told that there are about 24 Tirthankaras. There are infinite cycles of time, each with 24 teachers revealing Jain wisdom to humanity. Mahavir is the last Tirthankar of this kalpa. Ravana will be a Tirthankar in a future kalpa.

Timeless wisdom is essentially linked to human mind. Ever since Homo sapiens evolved from apes, the brain has not gone through any major change. Therefore we are dealing with the same emotional issues as our ancestors, despite technological development. We are still dealing with the same desires, the same frustrations, the same yearning for meaning. Our insecurities and imaginations have sought ways to create meaning through mythologies. We know that we are finite, and our lives have expiry date, but we want to believe that what we have faith in is infinite and timeless. It comforts us with the delusion of immortality (amruta). Anyone who shatters this delusion (maya) with knowledge (vidya) becomes the enemy. And needs to be attacked.