Is Hinduism Answerable to Western Gaze? 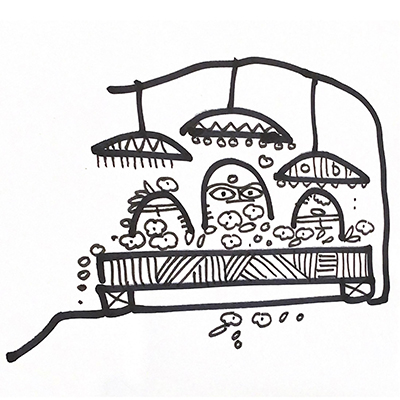 By Devdutt
11th September, 2021
The Times of India

The word religion initially applied to only Christianity. Everyone else was either heretic or pagan. But in the 19th Century, Europeans were forced to acknowledge the validity of Japanese faith if they sought access to Japanese markets. Thus the idea of ‘many religions’ emerged. Hinduism was acknowledged as a valid faith. But was it based on ‘truth’ or ‘falsehood’? It had many gods, and it enshrined idols in temples, and that made it ‘pagan’ in the eyes of Europeans. Such qualifications, nomenclatures and classifications were self-serving as it justified Christian missionary activity, colonialism, conquest and conversion.

Hinduism was forced to explain itself – be a religion. It needed a holy book (Gita or Veda?), a founder (Ram, Krishna, Shiva, Brahma?), a consistent refined set of ideas (Advaita? Bhakti? Tantra?), in order to be ‘true’. It had to explain the worship of idols, cows and trees. This desire to satisfy the European gaze is obvious in the 19th Century writings of Aurobindo, Dayanand Saraswati and Vivekanand. They privileged Upanishadic philosophy over Puranic mythology.This colonial hangover persists amongst Hindutva folk even today, which is why they get triggered by words like ‘mythology’ despite 20th Century postmodern challenges to the word ‘truth’.

Structurally, however, Hinduism remains very different from monotheistic faiths. This is most evident in religious structures. A church, synagogue or mosque is a communal gathering space, where everybody comes together to pray to the one true God, following common rituals. Although it is meant to equalise all believers, one sees gender and class segregation, but that is another topic.

A Hindu temple, by contrast, is not a community prayer hall, despite the existence of a mandapa or a gathering hall, in front of the temple. A temple, especially in Hinduism, is the devalaya, or the house of a god. Devotees go to visit a god, as they would visit a friend, family, chieftain or leader. They go bearing gifts and hope to get their problems solved in return. The key word during a temple visit is darshan, or seeing and being seen. It is not for prayer (prarthana) or meditation (dhyan).

The word ‘mandir’ may have been derived from the Sanskrit word ‘mandar’, which refers the central axis of the universe. A temple was supposed to capture the divine power in the middle of the village. It would then radiate this power to every corner of the village creating prosperity. Hence the great attention to temple architecture, the pyramidal roof, the deities on the walls, the floor-plan similar to a Tantrik mandala diagram.

Houses were built around the temple in concentric rings. This was the raj-mandala, with god and king in the centre. Power was closest to the centre hence given to brahmins and land-owning aristocrats. Power became lesser as one moved away from the temple towards the outskirts, near the forests. Access to the temple was given only to purified priests, and to some members of the royalty and aristocracy. Later, certain caste members were allowed into the temple in the mandap but not beyond. The lower castes and outcastes had restricted access to the temple, or no access. For their benefit, a few times a year, the deity would go around the city on a chariot.

In Judaism, Christianity and Islam, the believers are equal in the eyes of God. All follow the same rules of God and all will be judged on the Judgement Day equally. This is reflected in the architecture, where everyone prays together in the same way – at least idealistically, and in theory. By contrast, Hinduism thrives on diversity of the body despite unity of the atma. Temples are adorned with different kinds of animals, plants, gods, demons and professions. Rituals change every day, every month, every year, every twelve years. There are many rules, but also many variations to the rules.

Where there is equality, the tendency is to homogenise things. So everyone has to dress the same way when going to Mecca, and pray the same way. But in societies where diversity thrives, there tends to be hierarchy, some are closer to the deity, others are distant. Some deities are more important, at particular times, at particular places, than others. European and Americans see this as celebrating inequality. This naturally upsets the Hindu elite, who feel the West continues to determine criteria of what religions should be.