Is Criticism Of Caste the Same As Hinduphobia? 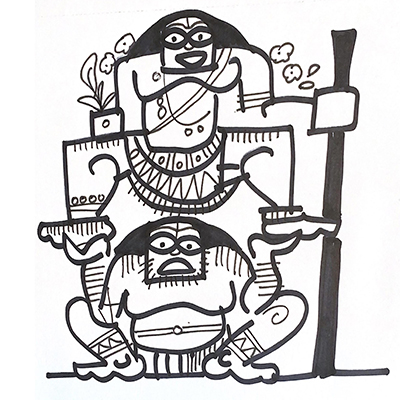 By Devdutt
26th September, 2021
The Times of India

Recently, a conference was held on the theme of ‘Dismantling Global Hindutva’. It was sponsored by American universities tired of Hindutva bullying. However, the decision to hold it immediately after the anniversary of the 9/11 twin tower attack, from September 10-12, was not accidental. It was a deliberate attempt to equate Hindutva with Islamic terrorism.

For many, this was seen as a Hinduphobic idea. Many of the sponsors and participants of the conference see Hinduism as essentially casteist in nature, and for many caste is as bad as terrorism, designed to systematically strip one group of people of resources, power and dignity for the benefit of another.

Academicians who will never equate Islam with terrorism seem to have no problem equating Hinduism with caste. When this happens, when all things Hindu are seen as casteist, then anti-caste movements become essentially anti-Hindu movements. And Hindutva, which opposes anti-Hindu movements then, by circular logic, becomes casteist. In fact, anyone who has anything nice to say about Hinduism also becomes casteist, and ‘soft’ Hindutva. Even Gandhi is not spared.

It all began in the 19th century when the word ‘Hinduism’ was invented by Raja Ram Mohan Roy in his pursuit to purge Indian society of regressive practices such as Sati and child marriage and infanticide. This reformist approach was seen as an insidious attempt by missionaries to mock Hindu beliefs and justify conversion. In retaliation, the word ‘Hindutva’ was invented by Chandranath Basu. This split Hindu society in two. Those who favoured reform were seen as anti-Hindu. Those who opposed reform were labelled regressive, and now casteist. You could be either one or the other.

All things in Hinduism can easily be linked to caste. Take for example, the Vedas. Since only Brahmins were allowed to recite them for a very long time, it can be argued that Vedanta is essentially Brahmanical, and so not applicable to all Hindus. Ramayana and Mahabharata, that focus on kings and their brahmin advisors, can be seen as savarna epics, especially with casteist tales like discrimination against Shambuka, Ekalavya and Karna. Dharma-shastras, or legal codes, written by Brahmins to retain Brahmin power, factor caste into all legal matters.

Many argue, based on 19th century racial theories, that worship of Durga and Ram is actually an endorsement of Aryan supremacy over dark Dravidian races, hence ‘upper’ caste belief systems. Onam is presented in many Marxist circles as the rise of the pre-Brahmanical subaltern king. Vegetarianism can easily be argued as a Jain or Brahmin, anti-Islamic, anti-Buddhist practice, even though all Brahmin communities are not vegetarians.

Pride of Maratha, Rajput, Kayastha, Agarwal, Patel, Gujjar identities are obviously casteist, but they play a key role in mobilising communities and obtaining a share of the reservation system. Until the 20th century, most temples were out of bounds for the ‘lower’ castes. That makes even temples an institution that endorsed caste hierarchy.

In a world that sees equality and social justice as a universal truism, all Hindu institutions then need to be dismantled as they are all promoting caste hegemony. Hindutva sees democratic institutions doing precisely that: favouring mosques and churches over temples, because only the latter is casteist. Some even argue that ‘annihilating caste’ is code word for ‘destroying Hinduism’ and therefore an expression of covert Hinduphobia. The movement to oppose this Hinduphobia is termed Hindutva, which is then conflated with Hinduism, leading to confusion all around.

Since the dawn of time, people have used various tools to distribute resources and respect. Caste was one model. Tribe is another. Clan is another. Religion and nation are still other models. While caste created the heinous practice of ‘untouchability’, we find different types of xenophobic activities in other forms of social groups. We are trained by tribes, clans, nations and religions to despise other clans, nations and religions, so that insider wealth is not shared with outsiders. In-groups often dehumanise out-groups to feel superior. Singling out caste is unfair. The Indian Left almost makes oppression a uniquely Hindu activity even though caste-based ideas continue to shape Muslims, Christians and Buddhists of India.

‘Annihilating caste’ and ‘Dismantling Hindutva’ are great war cries. But they will not solve the inherent problem of group inequality in human history, born of various group dynamics, including and beyond the confines of South Asia. If anything, such conferences simply make bigots feel like victims, and energises them further.