Innovating in Forests and Fields 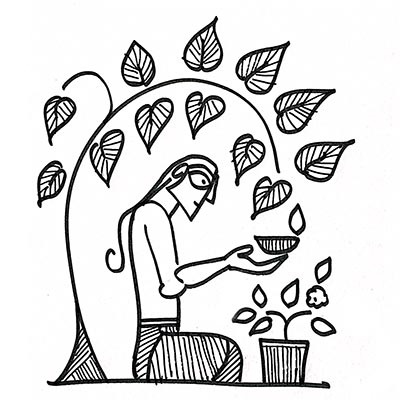 By Devdutt Pattanaik
02nd May, 2015
The Economic Times

In the Sama Veda, all the hymns of the Rig Veda are given melodies. These melodies are classified into two: the grama-geya-gana, that which must be sung in settlements, and aranya-geya-gana, that which must be sung in forests. The former is more accessible and popular while the latter is complex and distant, considered to be much more powerful. The settlement refers to familiar, predictable, domesticated spaces. But the forest evokes mystery, fear and the unknown. Corporations are settlements, functioning to a rhythm and a goal. Start-ups function outside corporations, in the forest, with no guarantee of success: it is a space of anxiety, and innovation.

In a start-up, the risk is taken by an individual or perhaps a bunch of individuals, who stake their career and comfort to take a risk and are answerable to no one but themselves. In a corporation, there is a whole bunch of shareholders who want quarter by quarter success, and have hawkeyed auditors and regulators checking if their investment is safe. The two ecosystems are very different. How does one create a forest within the settlement? Is it possible? Or will the forest turn out to be just another garden, well maintained by the management that expects predictable results?

We are always told successful stories of start-ups and innovators. No one really tells us the failure rates, the hundreds and thousands of ‘garage enterprises’ that failed despite promising starts and great investments. We are charmed by the ‘success’ of innovation, but few are warned of the failures of experimentation. Star-ups can handle the failure. But in corporations, someone needs to be held responsible for the loss of shareholder money. Who will it be? The CEO? Will he sacrifice his bonus if the innovations do not manifest, or fail to deliver a promise?

An innovator usually innovates so that he can benefit from the innovation, all talk of helping the market and providing customer value notwithstanding. He is spellbound by the glamour associated with innovation: the millions of dollars, the invitation to give talks at entrepreneur summits, the standard talk of hard work and risk taking and perseverance, and the denial of luck as a factor, which meets with standing ovation! In a corporation, who will benefit from the innovation? The individual, the team, or will they get just a sliver of the profit with the larger lion share going to the investor-shareholder?

In India, the ‘Brahmin’ was expected to stay poor in the pursuit of knowledge, and the ‘trader was expected to stay rich in the pursuit of wealth. However, in the new world order, every Brahmin functions like a trader and every trader functions like a Brahmin. The lines are blurred. Innovation is not its own reward; the money matters. And the developer is constantly afraid if the large corporation will appropriate his idea and he will be left with the scraps. It’s a real fear that makes many smart developers want to leave and start their own start-ups.

In ancient India, in many villages, there were sacred groves of the snake-goddess. The idea, we now realize, was to ensure biodiversity in the region, a place where the forest thrives, for the forest is where all seeds, not just profitable ones, can germinate without being discarded as weed. These were outside the settlement, not inside. Aranya is always outside, not inside the grama. So perhaps corporations can use a share of their wealth to support start-ups outside their controlled ecosystem. To support forests inside the settlement requires a great deal of courage. Google is striding forth in that direction and Apple too, though some people have doubts, despite rich profit-harvests. But it requires courage on the part of the shareholders, and the willingness to gamble, and even fail. Failure is something few Board of Directors would approve.