India and China Have Received Many Ideas from Each Other 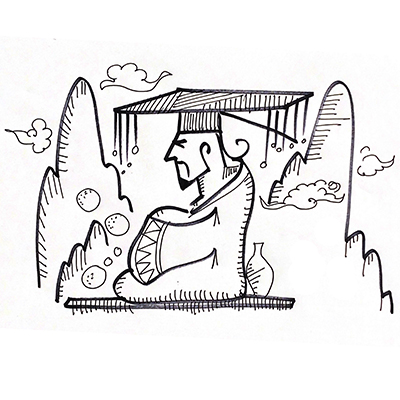 Nationalists in India and China love the idea that their culture influenced the world, but hate the idea that their culture was influenced by the world. While the Chinese preferred isolating themselves materially, with walls, Indians preferred isolating themselves psychologically using the caste mindset. Nevertheless, the two great civilisations have received many ideas from each other. We know how Buddhism spread from India to China. But we rarely discuss how steam and mercury technologies from China may have influenced Indian cooking and Indian alchemy.

Indirect contact between India and China is over 5000 years old indicated by the presence of silk threads in Harappan cities, and unique perforated stone harvester tools found in prehistoric Kashmir of the kind found in Yunnan province of China. As per Chinese written history, Chinese traders discovered the Gandhara region (now in Pakistan) around 2nd century BCE and that is when the oldest Chinese word for India entered the Chinese vocabulary. This word was Shin-du (people who live in Sindh, or what Persians called Hind).

The oldest manuscripts of Ramayana and Mahabharata, dateable to 2nd century BCE, are the first to refer to China. This was when China was first unified. This was followed by the Han period which established what we call ‘classical’ Chinese culture, and when interest in Buddhism began. This is when trade was amplified and cultural exchange increased. Han pushed out the Guishang people of the Yuezhi tribe out of western China. These people established the Kushan empire that stretched upto Mathura in India around 100 AD. The Kushan kings loved Mahayana Buddhism. Their coins also depict the earliest images of Shiva.

Interest in Buddhism peaked during the Tang period of the 7th century. This is when Chinese monks came to India in search of original Buddhist texts. The most famous monk was Xuanzang (Huein Tsang) who came at the time when Harshavardhan controlled the Gangetic plains. It was he who introduced the Chinese to a new name for India, Indu (Yin-du) that is still used today. After the Tang period, Chinese Buddhism became relatively more autonomous. The idea of many Buddhas and many Buddhist lands emerged that diluted the idea that India was the original birthplace of Buddhism.

When China was overtaken by Mongols in the 14th century, there was greater foreign interaction. Ideas such as gunpowder, paper, printing and magnetic compass spread out of China, and reached the rest of the world, including India, by the Islamic world which connected China to Europe and India. Vast Chinese ships began travelling beyond the Indian Ocean to Africa. However, this stopped after the 15th century as the Chinese Emperor chose isolation over interaction.

Besides the famous western land route and the eastern sea routes to China, we forget the very important routes connecting South China to Northeast and East India via Burma. From this route came the Tai-Ahom people, nudged by events in South China. The Tai people moved from Southern China in many directions. One group established the kingdom of Thailand. Another group entered the Brahmaputra valley in 12th century, about the same time when Muslim warlords were entering India from Central Asia and establishing Delhi Sultantate.

Ahom men, married local women, introduced new rice farming technology, and established a feudal order based on paying taxes through service (corvee) rather than grain. This ‘paik’ shaped Assamese society giving rise to titles like Saikia, Hazarika and Barua. Eventually the Ahom people integrated with the local Assamese Hinduism. Nationalists alway speak of how Assamese Hindus defeated the Mughal army; they forget to mention their Chinese Tai roots. Through these three routes came Chinese ideas related to steam and mercury that shaped Indian cooking and alchemy. Evidence is sparse but significant. We know that sesame (til) oil (tel) was discovered and manufactured in, and exported from, Harappan cities. This explains why frying is integral to Indian cooking. In the same way, steaming is integral to Chinese cooking. Many food historians are convinced that steamed idlis and steamed modaka (sweet momos) came to India via Chinese cooks, by the sea and land routes respectively. First reference to these foods come only after the 10th century. The same cooks may have taken deep frying to Chinese kitchens.

India’s alchemical tradition (Tantra, rasayana) became prominent around 10th century CE, especially in the East and the South, through the Siddha teachers. This is when we increasingly find literature talking about chakras, nadis, semen retention, breath control, to make humans immortal. Earlier Indian texts spoke of similar practices but only for spiritual liberation (moksha). But in the Tantrik age, the same practice seemed to benefit the flesh, cure ailments and reverse ageing, a concern that is prominent in ancient Taoist literature.

This is when alchemical traditions of mercury-based elixir appear in Tamil texts. Elemental mercury is linked to Shiva’s semen. It was a major import from China around 700 CE. Pulse reading (nadi-shastra) became part of Ayurveda at this time. Pulse reading is documented in Chinese Taoist texts, much earlier around 2nd century CE, long before Indian Ayurvedic texts. India had its own alchemical, occult and mystical practices. However, this amplification around the 10th century, and the focus on materiality, over spirituality, seems to be the result of intense cultural exchange following arrival of Chinese monks in Buddhist monasteries of Eastern India. This is exactly when Tantrik Hinduism and Tantrik Buddhism first started appearing in Cambodia and Indonesia.

Indians love the story of Bodhidharma, the Indian monk who travelled to China to teach the Chinese martial arts. But we also need to learn about Siddha Bogar, the Chinese sage, who came with knowledge of mercury to Palani in Tamil Nadu, who taught ascetic Siddhas the secret of immortality, a secret that was never shared even with the legendary and much feared First Emperor who unified China, who built a massive terracotta army to guard his tomb, who was determined to defeat death.