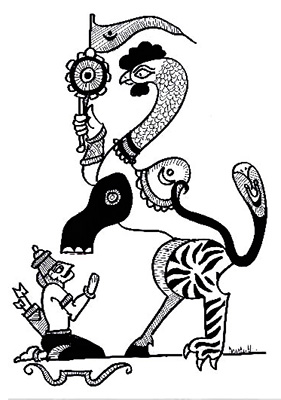 I am working as a HR head of an MNC and my American boss is a goals driven tyrant. He just doesn’t get the Indian way of doing thing and the nuances of the Indian market and believes in strictly following the company rules, processes, and approaches. It’s fast becoming a Boss-versus-the-rest kind of situation and worse, the boss has fired some employees recently. How do I create empathy in the boss and how do I manage the rest of the teams? I have tried interventions but nothing has worked. I hope mythology has some meaningful advice.

So imagine what happens when he comes to India where there seem to be no systems, no predictability, no value for efficiency or protocol, where everyone thinks he is better and smarter than the system, and so is busy improvising. He is bound to be terrified.

He is like the Greek hero, Bellerophon. When he saw a creature that was part goat, part snake and part lion, he declared it was a monster called Chimera, and proceeded to cut it down, categorizing it into neat understandable boxes, thereby killing it. So that is what he is doing. You may see him as a villain; but you know, he sees himself as the hero, and you are the monster that needs to be tamed.

He will lose, of course, and he will go back home and tell everyone to stay away from this strange land of Chimeras. Which means — lesser investment, lesser jobs, lesser growth, which does not bode well for India.

To create empathy in your boss, you have to first empathize with him. Convert yourself before you convert others. Don’t make this a power trip: he has to change because he is wrong. This is not a transaction: when he changes, I will change or he better change if I change. This is transformation: in his growth lies my growth.

Also remember, he has been sent by God (the board of directors) to save India, which for centuries, since time of colonizers and missionaries as a land that is chaotic and where people are oppressed by feudal overlords. This impression has not changed, and in fact, is reinforced by both Indian and Western media. So he sees himself as the prophet, bringing the commandments of God. So the more you resist him, the more villainous you appear. So first, calm down. Recognize the narrative he inhabits. And recognize your own.

Build a relationship with him, let him trust you, which means surrender to his will, and gradually reveal to him that the global way needs to take into consideration the India way. His way is not incorrect; it is just incomplete.